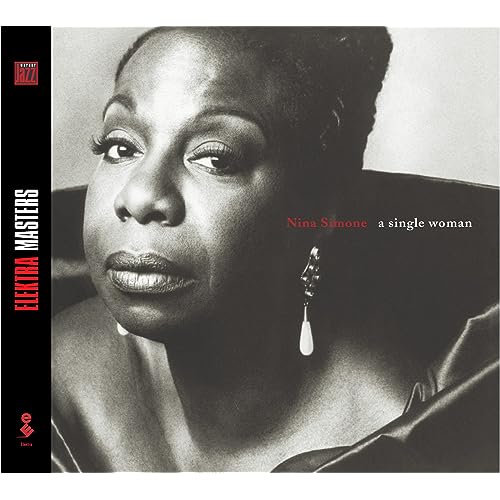 Today the finale of the Nina Simone story and a celebration of her life and music, particularly the singles that she released.

In her autobiography, Nina Simone writes that her function as an artist is “…to make people feel on a deep level. It’s difficult to describe because it’s not something you can analyse; to get near what it’s about you have to play it. And when you’ve caught it, when you’ve got the audience hooked, you always know because it’s like electricity hanging in the air.”

After travelling the world for nearly over 20 years, Nina Simone settled in Carry-le-Rout in Southern France in 1993. She also released the album Single Woman that year with the title track reflecting her solitary existence after the failure of her two marriages. Here is A Single woman written by Rod McKuen

Although she remained single she was surrounded by her entourage and certainly her enduring friendship and collaboration with both percussionist Leopoldo Fleming and guitarist and musical director Al Shackman was life and career sustaining. Nina Simone had never been afraid to voice her opinions about key issues and she certainly understood the pain of being both misunderstood and at times misrepresented in the media.

However, her fans were and still are steadfast and this was down to her magical performance skill in bringing the emotional elements of life through into her lyrics and music that resonated with all of us. She had a hypnotic quality that is best summed up in this performance of I Put a Spell on You. Written in 1956 by Jay Hawkins it was a song with a great pedigree and the original recording was named as one of Rock and Roll Hall of Fame’s 500 songs that Shaped Rock and Roll. Here is Nina with her version recorded and released as a single in 1965 as the title track from her album.

Nina had a keen ear and also business acumen and picked songs to record that had already proven themselves. This was the case with To Love Somebody written by Barry and Robin Gibb and released as their second single from Bee Gees 1st album in 1967. Having reached No 17 in the charts in the United States and No 41 in the UK, Nina released as a single in 1968 and the song out-performed the Bee Gees reaching No 5 in the UK charts.

There was an element of aloofness in Nina Simone’s performances which earned her the name ‘High Priestess of Soul‘. But on stage she could move seamlessly between gospel, blues, soul, jazz, folk and also pop music always maintaining that classical element that so defined her music. Whatever the style of music there is no doubt that those who were privileged to see Nina Simone live would leave the concert feeling good… Although it was not released as a single until 1994, Nina recorded Feeling Good in 1965 for her album I Put A Spell On You.

The song had been written by Anthony Newley and Leslie Bricusse for the musical The Roar of the Greasepaint- The Smell of the Crowd which was performed in the UK and on Broadway. The song would be covered many times but few have managed to perform it in quite the same way as Nina Simone.

For those who were not able to see Nina Simone in person the development of CDs and now digital reproduction meant that her work lives on and a new generation of fans is now buying her Music. Over one million of her recordings were sold on CD alone in the last ten years of her life.

Nina Simone received many honours during her lifetime with fifteen Grammy nominations, two honorary degrees in music and humanities from the University of Massachusetts Amherst and Malcolm X College. Ironically, shortly before her death she was also awarded an honorary degree by the Curtis Institute of Music school that rejected her application so many years before. In 2009 she was inducted into the North Carolina Music Hall of Fame and in 2010 a statue was erected in her honour in her home town of Tryon, North Carolina.

Nina had suffered from illness for several years and died in her sleep in 2003 at her home in France. She left behind an incredible legacy of music that more often than not reflected the anguish, passion and the joy of life in the 20th century. An unforgettable artist, woman and her star will shine on for all time.

For her finale I have selected Angel of the Morning. Written by New York songwriter Chip Taylor from the 1971 album Here Comes The Sun.

We hope that you have enjoyed the life and work of Nina Simone and if you are unfamiliar with her work that you will go out and buy her music so that you can experience yourself the magic of her legacy.