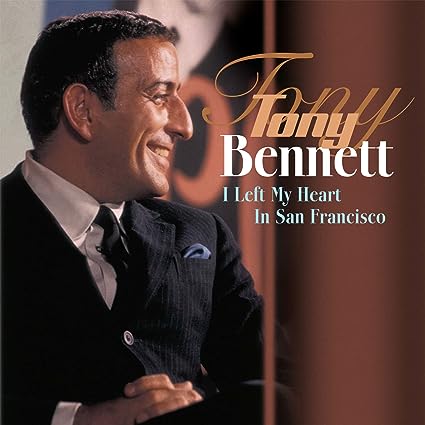 Born with a beautiful name in August 1926, Anthony Dominick Benedetto’s parents could not have known that by the much simpler name of Tony Bennett, their son would one day be loved by millions around the world. Tony Bennett is 90 years old this year and his singing career spans 80 of those incredible years. This week we will take a look at his early life and Tony’s determination to succeed as a performer.

John Benedetto was a grocer from Podargoini in Southern Italy and had arrived in the United States in 1906. He met and married Anna Suraci who had been born in America shortly after her parents had emigrated, also from Calabaria region, just before the turn of the century. Tony had an elder sister and brother, but his time with his father was too short as John died after a long illness in 1936, when Tony was only ten years old. This meant that his childhood, during what were the devastating years of the depression, were tough; but he was surrounded by a loving and supportive extended family who had all arrived together from Italy.

The music of the time however was anything but depressing and with the advent of sound for film, far more available to everyone. Some of Tony’s early musical influencers were Al Jolsen and Eddie Cantor. Here is the uplifting song Making Whoopee written in 1928 by Walter Donaldson and lyrics by Gus Kahn made famous by Eddie Cantor uploaded by Your Eddie Cantor channel.

Additionally for Tony, his Uncle Dick was in vaudeville as a tap dancer giving him an early introduction to show business. But school was the first priority for the young Tony and he attended the High School of Industrial Arts in Manhattan where he developed his two main passions, singing and painting. Radio was in its heyday showcasing artists such as Judy Garland and Bing Crosby and despite having to drop out of school at sixteen to help support his family, Tony was fixed on a career as a singer.

At the age of ten he had his first taste of performing in front of an appreciative audience when he had sung at the opening of the Triborough Bridge standing next to the then Mayor, Fiorello La Guardia. His drive to take his talent to stardom is demonstrated by his tireless commitment to combine working to support his family and using any remaining hours of the day to perform.

Tony had to focus on getting money for his family and for a time he worked in several low paid jobs including as a copy boy and runner for the Associated Press in Manhattan. He did however get a job as a singing waiter and set about entering any amateur night competitions across the city, which he usually won. This included a successful engagement at a well-known New Jersey nightclub.

However it was wartime and at age eighteen Tony was drafted into the US Army in November 1944. After basic training, Bennett was assigned to the 63rd Infantry Division (the “Blood and Fire” Division) where he served in France and Germany. Army Career

Being in the army also offered Tony the opportunity to perform with a military band and he finished the war touring Europe entertaining the troops. He remained there after the war and studied music at Heidelburg University before returning to the US in 1946. He studied Voice at the American Theatre Wing on the GI Bill. To support himself, he worked as an elevator operator and I am sure that he entertained the occupants as they travelled up and down with him.

Tony was taught the Bel Canto singing technique. Translated from the Italian it means ‘beautiful singing’ but the technique is much more complex than that simple description. Originating from the discipline of Italian opera the technique was used by professional singers around the world. There are certain elements involved which include strengthening the voice so that it does not tire over the course of a long performance. The voice should not be strained and should sound as effortless as speaking, preventing damage to the throat.

With this technique Tony has preserved his singing voice over the following 70 years and if you listen to his performances in his 30s and his more recent performances there is very little difference, which is a testament to the method.

One of his teachers at American Theatre Wing suggested that Tony also develop an unusual approach that involved imitating the style and phrasing of the best musicians of the day which included saxophonist Stan Getz and the piano of Art Tatum. This led to improvised variations to the standards of the day which made his performances stand out from the crowd. At the time he was performing under the name of Joe Bari and in 1949 cut an album under that name for a small label which did not sell terribly well.

However, his unique voice and performances began to get noticed by industry influencers and one of these, Pearl Bailey, asked him to open for her in Greenwich Village. Tony would later reflect on this lucky break.

“Bob Hope came down to check out my act. He liked my singing so much that after the show he came back to see me in my dressing room and said, ‘Come on kid, you’re going to come to the Paramount and sing with me.’ But first he told me he didn’t care for my stage name (Joe Bari) and asked me what my real name was. I told him, ‘My name is Anthony Dominick Benedetto’ and he said, ‘We’ll call you Tony Bennett.’

The top performer of the label was Frank Sinatra and his departure from Columbia coincided with Tony Bennett being signed. The label recognised that there was little merit in imitating Frank’s style, so Tony turned his talents to crooning popular and commercial songs. His first big hit was ‘Because of You’ which was produced by Mitch Miller with a wonderfully rich orchestral backing from Percy Faith. This song was hugely popular on the jukeboxes which now were standard in any coffee bar or club, and in 1951 it reached number one in the charts, staying there for ten weeks and selling over a million copies.

Because of You had been written in 1940 by Arthur Hammerstein and Dudley Wilkinson and it was also used in the 1951 film I Was an American Spy. Here is Tony Bennett with an original recording uploaded by tommy194070

The career of Tony Bennett was now on the fast track.

Next week The 50s and more fabulous music from Tony Bennett.