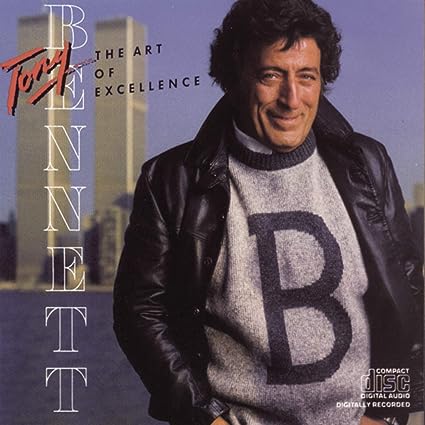 Welcome to part two of the Tony Bennett story and we are now into the early 50s with Tony still only 24 years old. His talent as already come to the attention of influencers in the music industry such as Bob Hope and his first single and career is now on the fast track.

Following on from Tony Bennett’s first big hit Because of You, later in 1951 he released another single; a cover of Hank William’s ‘Cold, Cold Heart’ bringing country to a much wider audience as it reached the top of the charts.. Mitch Miller and Percy Faith continued to work with the young singer as he hit the road on a concert tour including a seven show a day engagement at the Paramount Theater in New York. His legions of teenage fans packed the theater from 10.30 in the morning for the first show and certainly helped propel his next hit ‘Blue Velvet’ into the charts.

Blue Velvet was written in 1950 by Bernie Wayne and Lee Morris and was first recorded by Tony Bennett in 1951. Uploaded by DaveChristian 50s60s

In 1952 Columbia released Tony’s first Album Because Of You which included his first hit single and included Cold, Cold Heart. Other tracks included The Valentino Tango, While We Were Young and Boulevard of Broken Dreams.

In 1953 there was another number one hit with Rags to Riches which had a different style that Tony’s previous tracks. It was written by Richard Adler and Jerry Ross a partnership that would later bring The Pyjama Game to Broadway in 1954. Rags to Riches was an upbeat big band number backed by Percy Faith and his orchestra. It reached number one in the Billboard charts and stayed there for eight weeks becoming a gold record. Here it is uploaded by maumau1968

1953 continued to be a great year for Tony as he was approached by the producers of the new musical Kismet that took Broadway by storm that year. The musical, based on a 1911 play by Edward Knoblock, was collaboration between Robert Wright and George Forrest who adapted the music of Alexander Borodin alongside their original composition.

The song Stranger in Paradise written by Wright and Forrest was recorded by Tony Bennett in 1953. It was to be Tony’s break into the UK charts as it went to number one following the move of Kismet to The Stoll Theater in London’s West End.

1954 saw a change in Tony Bennett’s musical production team with the appointment of jazz guitarist Chuck Wayne as his musical director for the next three years until 1957. Chuck Wayne had been a prominent part of the 1940s Jazz scene working with Woody Herman and was the first guitarist for the George Shearing Quintet. He was known for his distinctive bebop style that had been influenced by horn players such as Charlie Parker. He developed a Wayne developed an unusual legato technique, not widely adopted by others until decades later. He brought his experience of working with singers such as Sarah Vaughn and Frank Sinatra to the Bennett production team and in 1955 Tony’s next album Cloud 7 featuring Chuck Wayne was released with a distinct jazz element.

Cloud 7 was Tony Bennett’s first studio album and featured tracks from the Great American Songbook with a very different style from his early hits; with a jazz combo backing instead of full orchestration. The tracks included Old Devil Moon, Love Letters and My Baby Just Cares for Me written by Walter Donaldson and Gus Kahn in 1930. As you will hear this is very different from the early tracks featured in the post. Uploaded by Music Legends Book

The music evolution was now rolling into the rock and roll era from 1955 and many of the artists from the 40s who had founded their careers on jazz found themselves dropping in the charts. However, because of Tony Bennett’s diverse range of styles and his now growing fan base, he still continued to do well commercially. These included From the Candy Store on the Corner to the Chapel on the Hill at number 11 in the Top Twenty in 1955 – The Autumn Waltz at number 18 in 1956 and In the Middle of an Island at number 9 in 1957.

A new opportunity opened up for Tony in the summer of 1956 when he was asked to host the NBC Saturday night variety show. The Tony Bennett Show was the replacement for The Perry Como Show and cemented Tony’s popularity in America.

In 1957 Chuck Wayne left Tony’s musical production team and he was replaced by Ralph Sharon who took over as his pianist, arranger and musical director. This was the start of a 50 year collaboration and relationship that only ended in 2005 when Ralph retired from the concert tours.

Ralph Sharon was born in London in 1923 and immigrated to America in 1954 at 29 years old. As well as working with Tony Bennett on tour and on albums, Ralph discovered one of the most iconic songs of both the period and Tony Bennett’s career I Left my Heart in San Francisco which we will feature in the post on the 60s next week.

With Ralph as his musical director the way forward was to continue with music that showcased Tony’s jazz inclinations and was commercial. This resulted in the 1957 album The Beat of my Heart. The backing featured well-known jazz musicians including Herbie Mann a jazz flautist who also played clarinet and tenor saxophone, percussionist Art Blakey and Jazz drummer and band leader Chico Hamilton. The tracks included Let There be Love, Lullaby of Broadway and Let’s Face the Music and Dance.

This was followed by a new working relationship when Tony Bennett became the first male pop vocalist to sing with the Count Basie Orchestra. They released the albums Live at the Latin Casino in Philadelphia with Count Basie, Strike up the Band and In Person! in 1959. Here is a track from In Person to finish our journey through the 1950s with Tony Bennett.

Chicago was written by Fred Fisher in 1922 and whilst Frank Sinatra made the song famous there is no doubt that Tony Bennett and Count Basie version is superb. Uploaded by Rubacuori1984’s channel

Next week The 60s and please join us for more fabulous music from Tony Bennett.