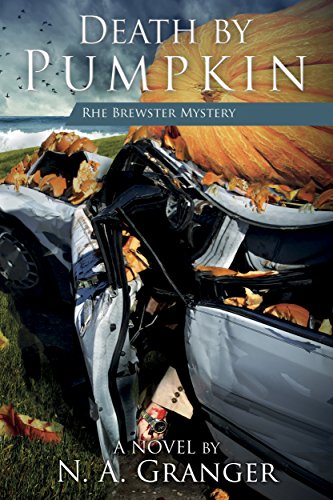 At the annual Pumpkin Festival in the coastal town of Pequod, Maine, Rhe Brewster, an ER nurse and Police Department consultant, responds to screams at the site of the Pumpkin Drop. Racing to the scene, where a one-ton pumpkin was dropped from a crane to crush an old car, Rhe and her brother-in-law, Sam, Pequod’s Chief of Police, discover the car contains the smashed remains of a man’s body. After the police confirm the death as a homicide, Rhe embarks on a statewide search to identify the victim and find the killer. During the course of the emotional investigation, she survives an attempt on her life at 10,000 feet, endures the trauma of witnessing the murder of an old flame, and escapes an arson attack on her family’s home. There is clearly a sociopath on the loose who is gunning for Rhe and leaving bodies behind. With Sam unable to offer his usual support due to an election recall and a needy new girlfriend, Rhe realizes that the only way to stop the insanity is to risk it all and play the killer’s game.

Maine’s most tenacious sleuth is back, this time to confront a menace that threatens to destroy her life and those closest to her. The latest installment of the Rhe Brewster Mystery Series, Death by Pumpkin, is a murder mystery and thriller that tests the limits of Rhe’s strength and resolve like never before.

Kate Loveton 5.0 out of 5 stars I love these books

I have been a fan of Ms. Granger’s series of novels about the intrepid Rhe Brewster since the first was published several years ago. I love these books!

Rhe is an ER nurse who works part time with the Pequod, Maine Police Department. She has a brother in law who is crazy about her and who just happens to be the chief of police, a boisterous young son, and a best friend who must be the world’s best cook. I think I gained 5 pounds just reading about the meals consumed by Rhe and the other characters in the book.

One of the things I like most about this series is Granger’s endearing characters. Picking up this latest book is like saying hello again to old friends you haven’t seen in a while. It is both warm and inviting to spend some time with Rhe and friends. Um, yes, I did just say that about a novel dealing with murder!

In this latest outing, Rhe has her hands full as she investigates a murder at a pumpkin festival, organizes a campaign to help her brother in law maintain his position with the Pequod PD in the face of ugly student protests from the local college, and tries to evade the clutches of a crazy person out to kill her. She does all this while eating meals that induced hunger in this reader, and while juggling a male suitor or two. Whew!

If you’re unfamiliar with N.A. Granger’s Rhe Brewster mysteries, check them out. They are fun to read and will definitely hold your interest. Just get ready to gain a pound or two…

Now for some adventure with the intrepid travellers in a caravan including four dogs...It Never Rains But It Paws: A Road Trip Through Politics And A Pandemic (Adventure Caravanning with Dogs Book 4) by Jacqueline Lambert. – The next book in the series is on pre-order for December 9th.

Five years after giving up work to travel full time, Dog-ma Jacqueline (Jackie) and Dogfather Mark race against time to leave the UK before Britain exits the EU. If Brexit happens, their four Cavapoos (Cavalier/Poodle cross) Kai, Rosie, Ruby, and Lani will lose their puppy passports, and the Lambert Family will be unable to travel together. But Brexit isn’t their only obstacle. A few months into their adventure, the pandemic suddenly shatters their plans, and leaves them trapped in the epicentre of Europe’s No. 1 coronavirus hotspot.

The fourth road trip Europe adventure in author Jacqueline Lambert’s “inspirational and hilarious” series of true travel memoirs invites you to join the couple as they discover even more amazing and little-known places, this time in France and Italy. However, this isn’t just a priceless escape travel story filled with humorous mishaps and mountain adventure. The coronavirus pandemic separates the family from their loved ones at home, and leaves Jackie stranded alone during a blizzard in a remote Italian village, with Mark thousands of miles away, back in the UK.

Between terrible weather, political mayhem, and a global pandemic, Jackie and Mark try to take lessons from each hardship. Yet, even with a positive attitude, a sense of adventure, and a caravan full of loved ones, you can’t stop all the obstacles life rolls your way. These “amusing and informative” travel stories are certainly proof that It Never Rains… But It Paws!

Beth Haslam VINE VOICE5.0 out of 5 stars A Pawfect Title for this Adventure!

Brexit is a reality, and new regulations will impact the author and her husband’s nomadic lifestyle. Do they stay put? No. Fearful that their beloved Cavapoo dogs’ passports will become invalid if the UK leaves without a deal, they pack up and head for Italy. But it isn’t plain sailing.

Adverse weather, financial worries and misadventures hound the family as they drive across Europe. Finally, they make it to their favourite Italian resort to face a new challenge. Covid. And they are locked down.

The book is filled with fun stories and honesty about their challenges, too. Jacqueline’s accounts of the difficulties associated with social isolation and the politics at the time are insightful. They are beautifully balanced with vivid descriptions of the fabulous countryside that becomes their temporary home.

As an established fan of the author’s writing, I loved this book. Interwoven throughout are enchanting tales about their four adored dogs, which were a highlight for me. Her empathetic, colourful style is warm and easy to read, and I always come away having learned more about the countries she and her family have visited. I look forward to the next episode in their travels.

Other books in the series by Jacqueline Lambert

Inspired by real events chronicled by a journalist for The World News, Elizabeth Cochrane (pen name, Nellie Bly), in 1887.

Klara Gelfman’s life in Kiev was serene until she turned nineteen. That’s when Russia’s Tsar Alexander II was assassinated, and a vicious propaganda campaign spread that blamed the Jews for his death. Klara and her family became victims of the many pogroms breaking out throughout Russia. None were so violent as what hit Kiev in 1881. It was there that Klara’s family was torn asunder and her world changed forever.

This is the story of what happens to this traumatized, orphaned, young Jewish woman when she escapes Russia and crosses an ocean to arrive on the rough streets of New York City able to speak only a few words of English. There, in the land of the free, Klara’s life is thrown into turmoil when she is mistaken for a drunken prostitute. Mistreated by those entrusted to protect her—the police, a judge, doctors, and nurses—she is condemned to an unrelenting hellscape when she is incorrectly and involuntarily committed to a lunatic asylum.

At a time when women had no political, economic or professional rights, comes a story where corruption by the powerful was as overt and commonplace as was garbage on the New York City streets. From the award-winning, international best-selling author of The Seven Year Dress comes an unforgettable story of the devastating effects of persecution, hatred, and arrogance. A Different Kind of Angel is also a story of love, family, friendship, and loyalty. It is a journey into the nature and heart of the resilience of the human spirit that will leave readers thinking about the story long after they finish the book.

Marina Osipova 5.0 out of 5 stars Beautifully written and emotionally involving

Preceded by the pogrom of 1881 in Kiev, A Different Kind of Angel starts in 1882 in NY city, in the Women’s Lunatic Asylum on Blackwell’s Island which is the epitome of the filthy conditions and malnutrition, inhuman treatment of patients bordering on the physical and emotional torture, indifference to the inmates’ suffering, and the criminal way of confining the ones who were unfavorable for those in power and other many innocents.

This is the place where a young woman, Klara Gelfman, a recent refugee finds herself—as if the horrors of her life in Russia were not enough to test the limits of her endurance. This is her story, as well as of other unfortunates whose fate brought them to that hell on earth. The author’s undeniable expert ability to bring the reader face-to-face with her characters and their emotions makes the feel of the devastating reality even more horrifying.

However, even in the place with an inexcusable carelessness, friendship and caring for others grows among the inmates. In the center of the story, there is a burning intrigue ready to explode. It held this reader glued to the chair till it was revealed in the last part of the tale—one of the author’s talents that makes the story enticing, poignant, and important.

The end of Klara’s story made me spellbound.

One of my favorite historical fiction authors, Paulette Mahurin gifted this reader with hours of touching and breathtaking read. I can’t recommend it highly enough.

A selection of other books by Paulette Mahurin

Thank you for dropping in today and I hope you will be leaving with some books.. Sally.