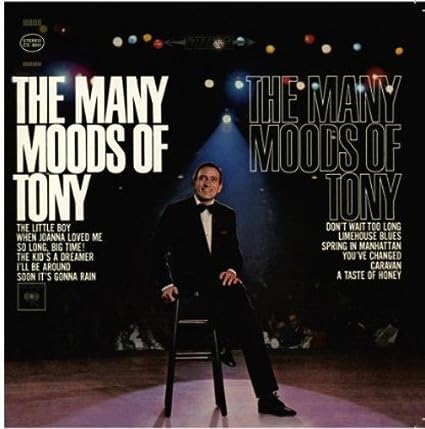 We pick up Tony Bennett’s story as we head into the 1970s and to be honest this was a very mixed decade for Tony as an artist and in his personal life. His first marriage ended in divorce in 1971 and he married again later that year and welcomed two daughters Joanna and Antonia. The family moved to Los Angeles and musically Tony decided on a new direction with his music as well.

For any artist who had been in the business for nearly 30 years and had established themselves within the Jazz and Pop music lanes, it was going to be a tough decade. Rock was now firmly established in the charts and a new generation of fans were buying records. Tony Bennett was now in his late 40s and whilst he still had a loyal fan base, it was going to be a challenging time professionally.

Columbia Records had launched Tony’s career but he began to feel that his own artistic input was too restricted. The label would have loved to have him back in the fold but he turned them down in favour of a two record deal with MGM records. The two albums, The Good Things in Life and Listen Easy did not make a great impact in the charts and by 1972 Tony decided it was time to strike out on his own and he started his own record company, Improv.

Life is Beautiful was named after the song by Fred Astaire and the rest of the album reflected Tony Bennett’s two decades of exploring the American Songbook. Tracks included Reflections by Duke Ellington and Lost in the Stars by Kurt Weill. Whilst there were some supportive reviews from the critics the album did not enter the charts. However Reflections was singled out as being exceptional. Uploaded byTony Bennett

The two albums with jazz pianist Bill Evans were also well received and their first, with Fantasy, reached 31 in the Jazz charts. Tony was working with some of the best musicians in the business on the Improv releases including Charlie Byrd and Marian McPartland but without a distribution arrangement in place with a major label the albums were not getting the airtime or marketing they needed; although artistically sound, the label went out of business in 1977.

The Warwick label released a compilation album in 1977 The Very Best of Tony Bennett: 20 Greatest Hits and Columbia also released Tony Bennett with the McPartlands and Friends Make Magnificent Music. They were to be the last albums until the mid-80s.

Tony did however release some singles in the early 70s that did better in the charts and included Something, Living Together, Growing Together, Life is Beautiful, As Time Goes By and the theme song from Love Story, Where Do I Begin.

Where Do I Begin was composed by Francis Lai and after the music had become popular on the release of the film, the lyrics were added, written by Carl Sigman. Uploaded trooper7h

The last part of the 1970s were difficult years and unfortunately his second marriage also broke down. Without a recording contract and manager, Tony was performing intermittently in Las Vegas and the IRS was also attempting to seize some of his assets.

Eventually in 1979 following a near fatal overdose Tony finally reached out to his two sons and his son Danny signed on has his manager.

The next ten years were to be much more positive and with his new manager’s guidance and innovative marketing strategy, Tony Bennett staged a comeback.

With his expenses under control and the IRS satisfied with a repayment plan, Danny took Tony away from the Las Vegas environment and booked him into smaller venues around the country to entertain a younger audience. Pianist Ralph Sharon came back onto the team as Musical Director and would stay with Tony until 2002.

Unlike many performers who were attempting to appeal to a new generation, Tony Bennett made few changes to his classic style or appearance and stayed firmly in his musical lane. Danny however booked Tony onto the popular chat and entertainment shows on television including Late Night With Letterman, The Simpsons, Muppets Tonight and on MTV. This brought his exceptional performance skills and the music of the last five decades to a brand new audience who loved it.

The strategy began to work and in 1986 Tony re-joined Columbia Records, this time with creative control and released The Art of Excellence which was the first to reach the charts since 1972.

Tony Bennett was on his way back and he performed his way into the 90s.

To end this rollercoaster ride that was the 70s and 80s here is the appropriate song How Do You Keep The Music Playing by A.Bergman, M.Bergman and Michel Legrand from the album The Art of Excellence. Uploaded by Jason Borba