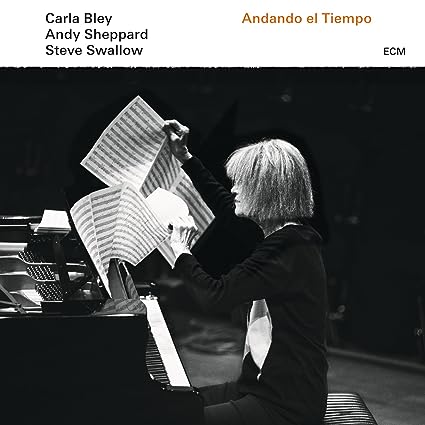 Carla Bley is an American jazz composer, pianist, organist and bandleader. Born in 1938 she was an important figure in the free jazz movement of the 1960s. Carla was born Lovella May Borg in Oakland, California and was encouraged to sing and play piano by her piano teacher and church Choirmaster. She tragically lost her mother at eight years old and moved to New York aged seventeen to become a cigarette girl at the legendary Birdland club. Here she met her future husband jazz pianist Paul Bley and toured with him as Karen Borg, later changing her stage name to Carla Bley in 1957.

A number of musicians began to record her compositions and throughout her career she has considered herself to be a composer first. She was involved in organising the Jazz Composers Guild in 1964 which brought together the most innovative musicians in New York at the time. And she co-led the Jazz Composers Orchestra with her second husband Michael Mantler. This led to the creation of the JCOA record label which issued recordings by other notable musicians such as Clifford Thornton and Roswell Rudd as well as her own work.
She continues to play and record with her own big band and compose for other musicians.

You can read the full biography at Carla Bley Wikipedia

Now time to enjoy some of Carla Bley’s music.

“Escalator over the Hill” is a jazz opera written by Paul Haines and Carla Bley. It was produced and coordinated by Michael Mantler over a two year period from 1968 to 1971 and performed by the ‘Jazz Composer’s Orchestra.’* There are vocals on most of the tracks and each singer plays a character. EOTH creates a magical universe with a convergence of raga, rock, jazz, avant garde, and surrealist theater – all brought together through Carla Bley’s extraordinary sense and ability to unify diverse musical segments. The mood of this jazz opera is one of almost complete loss of rationality and the sense of morality is absent. All of this takes place inside a cheesy hotel full of low-life degenerates and their vices. Joining Ms. Bley on this album are heavy weights Don Cherry, Charlie Haden, Manfred Mann’s Paul Jones and Linda Ronstadt.

“Music Mechanique” was released in 1979 on the Watt/ECM label featuring Michael Mantler on trumpet, Gary Windo on tenor and bass clarinet, Roswell Rudd on trombone, and Bob Stewart on tuba. The album opens with a track called ‘440’ in reference to the frequency orchestras use to tune up before a concert. The music on this album lies somewhere between big band, fusion, and avant garde, spotlighting the horns. The colorful three-part “Music Mechanique” opens with random tones and sounds and builds up into a frenzy. The random noises come from Bley’s toy piano, her daughter’s glockenspiel, and a walkie talkie. The third parts ends with the band imitating a skipping vinyl record, causing weird rhythmic sounds as if a piece of dust got caught in a groove and the needle which turns the grooves into sound keeps bumping back. Amazing.

“The Lord is Listenin’ To Ya, Hallelujah!” is from Bley’s ‘Live!’ album, released in 1982 and recorded in the presence of a live attentive audience at San Francisco’s Great American Music Hall. This song is not as experimental as her earlier works but reflects her religious childhood. The unparalleled Gary Valente, in his trombone solo, performs a brilliant caricature of the ‘salvation style’ which the audiences responds to much like the call and response associated with church revivals. This adds to the musical color of the piece. The ‘Penguin Guide to Jazz’ gave the album 3½ stars.

“Andando el Tiempo” was recorded in 2015 with saxophonist Andy Sheppard and bass guitarist Steve Swallow on the ECM label, and is a three movement composition dealing with addiction and recovery, inspired by a friend of Bley’s struggle with alcoholism. Each section of this work represents different stages of recovery from addiction. This is an album of introspective music highlighting her noncompliance with jazz and classical conventions. Although she has mastered all of the characteristics of musical narrative, here she minimizes her occasional excesses in favor of warmth and class.

*The Jazz Composer’s Orchestra was an American jazz group founded by Carla Bley and Michael Mantler in 1965 to perform orchestral avant-garde jazz.

Here is a track from the album with an intro from Carla Bley Naked Bridges Diving Brides you can hear the full album: Andando el Tiempo

Buy the music of Carla Bley: Amazon US

My thanks to William for sharing this very unique artist with us and thank you for dropping in today.  As always your feedback is very welcome.

Making My Mess My Message