Welcome to the first of the Music Column for 2020 and this week William Price King shares the life and music of the legendary Count Basie. 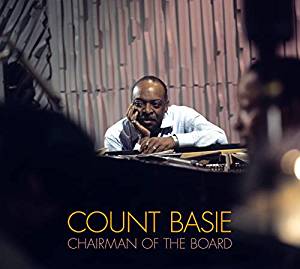 The title of one of his band’s most famous tunes — “The Kid from Red Bank” – is an obvious tip-off, but many jazz historians assume that William J. “Count” Basie, Jr. was a native of Kansas City, Missouri. And while that’s where Basie and his band rose to national fame, the jazz great’s origins can be traced to a house located just blocks away from the historic theater that today bears his name.

William Basie was born at 229 Mechanic Street on August 21, 1904. His father, Harvey Lee Basie, was a coachman and caretaker; his mother, Lillian Childs Basie, was a laundress, taking in washing and ironing. A brother, James, died when William was a young boy. The family always owned a piano, and Lilly Ann paid twenty-five cents per lesson to teach William to play.

In addition to helping his parents, William also did chores at Red Bank’s now-defunct Palace Theater. A projectionist taught him to rewind the reels, switch between projectors, and operate the spotlight for the vaudeville shows. On the afternoon the Palace’s house pianist failed to show for work, Basie offered to fill in – but was denied. Nonetheless persistent, the young Basie waited for the film to start, crept into the orchestra pit, and accompanied the film anyway. He was invited back to perform that evening.

Though Basie’s initial intentions were to become a drummer, his ambitions in that direction were forever erased after hearing drummer Sonny Greer from Long Branch. Greer, who later rose to fame as the drummer for the Duke Ellington Orchestra, was so obviously superior to Basie that he made a hasty retreat to the piano. The men became friends and formed a duo.

Decades later, the two would be among fifty-seven musicians photographed on the stoop of a Harlem, brownstone by Art Kane, in a shot to accompany an Esquire magazine article on the “Golden Age of Jazz.” The photograph would later become as famous as the subjects it depicted, as inspiration for the documentary A Great Day in Harlem.

Read the rest of Count Basie’s biography on his official website: The Basie. Org 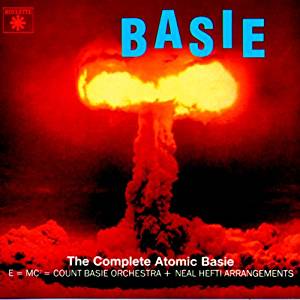 “Lil Darlin’” is from the album “The Atomic Mr. Basie “, also known as E=MC2, and was recorded in 1958 by Count Basie and his orchestra. Most of the arrangements on the album were done by Neal Hefti. The album gets off to a great start with an explosively energetic trumpet section and piano solo in ‘The Kid From Red Bank’ and continues with an almost telepathic gift of synchronized riffing from the band behind a star soloist improvising in gaps left in Hefti’s arrangements.

This album is included in the book ‘1001 Albums You Must Hear Before You Die’ and was the 6th most critically acclaimed album of 1958, the 25rd most acclaimed of the 1950s, and the 837th most acclaimed of all time, based on an aggregation of hundreds of critics’ lists from around the world. The album won ‘Best Jazz Performance, Group and Best Performance by a Dance Band’ awards at the 1st Annual Grammy Awards in 1959.

“One O’Clock Jump”, a 12 bar blues instrumental that builds in rhythmic intensity and foregrounds a succession of soloists over riff backings, was written by Basie in 1937 and became his theme song, which he used to close each concert for almost a half of a century. This song is typical of Basie’s early ‘riff’ style where the instrumentation was based on ‘head arrangements.’

* The musicians would take turns improvising over the top of the entire sound. “One O’Clock Jump” was originally titled ‘Blue Ball’ but a radio announcer feared that the title was too risqué. It was inducted into the Grammy Hall of Fame in 1979 and later listed in the prestigious ‘Songs of the Century’ by the Recording Industry Association of America, the National Endowment for the Arts, and Scholastic Inc. that aims to ‘promote a better understanding of America’s musical and cultural heritage’ in American schools.

“Jumpin’ at the Woodside” was recorded in 1938 on Decca Records and was often considered the epitome of swing. It had a super swinging rhythm section and shout choruses from the horn section. It featured solos from Earle Warren on alto sax, Buck Clayton on trumpet, Lester Young on tenor sax, and Herschel Evans on clarinet. It peaked at #11 on Billboard and stayed on the charts for four weeks.

The song was named after the Woodside hotel where the band was based and where they rehearsed when in New York City. The Woodside hotel distinguished itself by becoming a popular place for jazz musicians and Negro league baseball teams to stay while in New York during segregation. “ Jumpin’ at the Woodside” was used in the Broadway show ‘Hellzapoppin’ in 1941 as well as other shows from that era.

“Who Me?” is from the 1959 album “Chairman of the Board”. This swinging Basie piece has all the ingredients that make his music and his orchestra exceptional – expressiveness, dynamics, phrasing, and most importantly nuance. The blues have always been the foundation of Basie’s music and most of the tracks from this album exploit the variety of the 12-bar blues form and the band’s Kansas City roots. Basie defines, once again, what jazz is with his performance and his blend of showmanship and musicianship, spotlighted so well in the video “Who Me?” and the album as a whole.

Buy the music of Count Basie: Amazon US