This time of year, I re-post the series The War Poets. Just some of the men and women who served on the front line on all sides of the conflict who fought, died or returned scarred by their experiences.

They are going out at 4.a.m each morning my time, which is the coldest before the dawn, and as they would have woken in the trenches to prepare for another day of horror, bravery and sacrifice.

We often dismiss the words of the young due to their lack of life experience. However there was no such lack in the lives of the youthful poets who experienced the dreadful events of the First and Second World War. Today a woman who lived through both of these conflicts and lost ones that she loved. 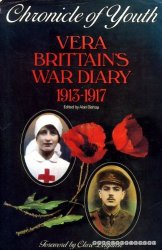 The first poet in the series on the War Poets is a woman, Vera Brittain, feminist, poet and novelist, who was born in Newcastle under Lyme on 29 December 1893, and was raised in Macclesfield and Buxton. Educated at St. Monica’s School and Somerville College, Oxford. She left to serve as a Voluntary Aid Detachment nurse (VAD) during the First World war, being posted to France and Malta. Vera became engaged during the war, in 1915, to Roland Leighton but sadly he was killed by a sniper in December of that year. Tragically she was also to lose her brother Edward in 1918 and two other very close friends.

Following the end of the war, Vera returned to Oxford to read history, and worked briefly as a teacher before devoting her time to writing. By now a committed pacifist, she was involved with the Peace Pledge Union until her death, and served as vice-president of the national Peace Council, campaigning for peace during the Second World War.

In 1925 Vera married George C.G. Catlin a political scientist and they moved to New York for a year to live. Her famous memoir Testament of Youth was published in 1933, a story of ‘the lost generation’. The book also recounted her wartime experiences and her marriage to George C.G. Catlin.

Vera Brittain died in Wimbledon on 29 March 1970. Her ashes were sprinkled over her brother Edward’s grave in Italy, where he died. I have chosen her poem The Superflouous Woman because I think it reflects the enormity of the loss of nearly a whole generation of young men who died in the First World War and the millions of young women at the end of the conflict, who lost not only their boyfriends and husbands, but in many cases the chance of every finding love again.

Ghosts crying down the vistas of the years,
Recalling words
Whose echoes long have died,
And kind moss grown
Over the sharp and blood-bespattered stones
Which cut our feet upon the ancient ways.
But who will look for my coming?

Long busy days where many meet and part;
Crowded aside
Remembered hours of hope;
And city streets
Grown dark and hot with eager multitudes
Hurrying homeward whither respite waits.
But who will seek me at nightfall?

Light fading where the chimneys cut the sky;
Footsteps that pass,
Nor tarry at my door.
And far away,
Behind the row of crosses, shadows black
Stretch out long arms before the smouldering sun.
But who will give me my children? 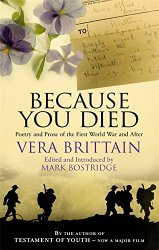 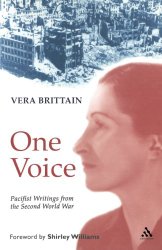 Sources and for more information and the work of Vera Brittain: First World War Poets and Prose

Thank you for dropping in today and I hope…Sally