Welcome to the first of the Cafe and Bookstore updates this week and some new releases and reviews.

The first author with a new release is Sandra Cox with a western romance – Gwen Slade: Bounty Hunter. 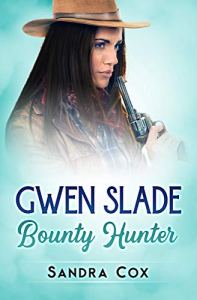 After Jordie saves her family, she finds she can’t in good conscience turn him in, even if he is worth a thousand dollars dead or alive. Instead she sets her sights on the meanest, most-wanted gang in Kansas. Gwen always works alone until she goes after the gang then finds herself partnering with an unlikely source.

This time around, not only her life, but her heart is on the line.

D.L. Finn5.0 out of 5 stars This is an exciting Western romance that I didn’t want to end! Reviewed in the United States on December 17, 2020

Gwen is a young woman who’s raising her little brother with the help of a family friend, Chen. She took after her father, who was a Bounty Hunter. After a job, she comes home to a man who saved her family from a would-be robber. The hero, Jordie, leaves the minute the sheriff arrives. Gwen finds out that Jordie is wanted, but she doesn’t go after him after saving her family. Gwen wants to move to Montana and start a new life on a horse ranch, so she takes the job of catching three of the worst outlaw brothers.

I love Gwen’s strength and ability to take care of herself in a time when women were more dependent on men. Promising one last job to her little brother, she sets off, against the sheriff’s advice, to catch her outlaws and earn her big retirement payoff. She ends up with an unexpected partner. I love the relationship that develops between them on the trail.

There are great conversations and plenty of action. As the two learn about each other, a dog finds them. You can’t help but fall in love with these amazing characters or the dog. I didn’t expect a couple of twists, and the scenery was detailed, making me feel like I was along on the ride. This is an exciting Western romance that I didn’t want to end, but it did and very satisfactorily. I hope we aren’t done hearing from Gwen Slade. She’s a wonderful heroine. I highly recommend “Gwen Slade, Bounty Hunter.”

Read the reviews and buy the book :  Amazon US – And: Amazon UK

In The Fall of Lilith, award-winning author Vashti Quiroz-Vega took readers inside the gates of heaven for a front-row seat to Lucifer’s rebellion. In Son of the Serpent, she introduced Dracúl, tormented offspring of fallen angels. Now, in The Rise of Gadreel, Quiroz-Vega is back with the next chapter in her Fantasy Angels saga—a gripping tale of hope and redemption set against the fiery backdrop of a demon’s insatiable thirst for power and revenge.

Lilith is gone, suffering the torments of the damned in hell. Satan, once known as Lucifer, endures endless agony in an earthly prison. Yet their foul legacy lives on, spread by a corrupted priesthood that uses the blackest magic to fan the flames of evil and hate throughout the world.

The former angel Gadreel, who fought and fell alongside Lilith and Lucifer, only to join Dracúl in his fight against them, is weary of war. Repenting of past sins, she wants nothing more than to be left in peace. But when a new threat to humankind arises, Gadreel is given the chance she has prayed for—the chance to earn God’s forgiveness.

Now, with the aid of Dracúl and a trio of uncanny allies—a man of air, a man of stone, and a woman of fire—at her side, Gadreel must find the courage to confront her past and forge a new future for herself . . . and the world.

Gwendolyn Plano5.0 out of 5 stars A story well-written and fiercely told… Reviewed in the United States on November 28, 2020

Author Quiroz-Vega’s second book of the Angels Series is powerful. It hits hard and runs, never stopping. I had to pause to take a breath and separate myself from some of the drama, but I felt compelled to read to the end. This remake of the Biblical story is curious but also believable. Well edited, well researched, I commend Quiroz-Vega on tackling this epic story.

Now time for a recent review

And the final book today is the poetry collection Timeless Echoes by Balroop Singh with a recent review. 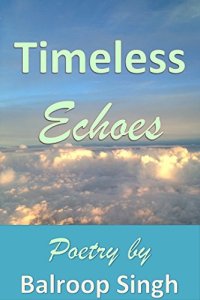 Certain desires and thoughts remain within our heart, we can’t express them, we wait for the right time, which never comes till they make inroads out of our most guarded fortresses to spill on to the pages of our choice. This collection is an echo of that love, which remained obscure, those yearnings that were suppressed, the regrets that we refuse to acknowledge. Many poems seem personal because they are written in first person but they have been inspired from the people around me – friends and acquaintances who shared their stories with me.

Some secrets have to remain buried because they are ours
We do share them but only with the stars
The tears that guarded them were as precious as flowers
Soothing like balm on festering scars.

While there are no boxes for grief and joy, some persons in our life are more closely associated with these emotions. Their separation shatters us, their memories echo, we grieve but life does not stagnate for anyone…it is more like a river that flows despite the boulders. When imagination and inspiration try to offer solace, poetry that you are about to read springs forth.

A recent review for the collection

I’ve read Singh’s poetry books Magical Whispers, and Moments We Love, both of which I thoroughly enjoyed. So, I decided to travel back in time a couple of years and dive into an older collection. The poems of Timeless Echoes reflect the poet’s same beautiful voice and reflective musings with a slightly more formal style.

The poems struck me as personal, a sharing of the many facets of love and relationships – the joys, but also the regrets and hurts, those which we carry with us, examine with older eyes, and come to know in a new way or let go. My favorites were the more free-flowing poems that struck a personal chord: Ageless Echoes, Illusional Calm, New Life, and A Letter. This generous collection of nearly sixty poems can be easily read in an afternoon, though they deserve to be savored.

Read the reviews and buy the book: Amazon US – And:Amazon UK