This week I am reviewing a reference book for all authors who write novels set in World War Two in the UK and history enthusiasts. The Home Front: 1939–1945 in 100 Objects by Austin J. Ruddy

A colorful catalogue of objects that illustrate what everyday life was like in wartime Britain.

A lifesaving gas mask. A ration book, essential for the supply of food. A shelter stove that kept a family warm while they huddled in their Anderson shelter. A leaflet dropped by the Luftwaffe that was designed to intimidate Britain’s populace during the threat of invasion. A civilian identity card over-stamped with the swastika eagle from the occupied Channel Islands. A rare, previously unpublished, snapshot of legendary bandleader Glenn Miller playing at a UK air base. A twisted remnant of German V2 rocket that went to space and back before exploding over London, the result of equally twisted military science. Colorful flag bunting that saw the VE celebrations in 1945. These disparate objects and many more together tell the moving and important story of Britain’s home front during the Second World War.

The ordinary objects featured in this book, supplemented with facts, figures, dates, stories, and statistics, portray the highs and lows the British people experienced during six years of war—from the deprivations of rationing and the bombing of the Blitz, to the cheery songs, elegant fashions, and “Dig For Victory” spirit.

This book is one of the best resources for World War Two on the home front that I have read. Apart from enjoying history, I also wanted to discover more about air raid shelters and food rationing to expand on my mother’s stories of life in a village in Hampshire, close to Portsmouth docks. I got so much more from Austin Ruddy’s detailed accounts of all aspects of life for the population in the UK during this six years, and I found myself turning the pages fascinated to find out what would be featured next.

It is tough to describe the breadth of information and detail that is in the catalogue but I will try to give you a snapshot.

There are 100 objects or events described in detail from pre-war preparations, the evolving involvement and training of the Home Guard and ARP (Air Raid Precaution) services, the extensive fire watching organisation, fire fighting equipment, aircraft design for both RAF and Luftwaffe, bomb and incendiaries types, propaganda, bomb disposal, and the damage to historical buildings in places such as Coventry and other targeted cities across the UK.

Those that served on the Home Guard, Air Fire and Police services, in the Royal Air Force and the Royal and Merchant Navy are represented, as are the men and women who worked in the industries and on the land to further the war effort.

There are some mysteries explored, including that surrounding item 100…..

Today we recycle but during the war there was little waste,but certain items that we throw away today without thought were salvaged to be used in the war effort. Civilians played a huge role in this and six million tons was salvaged during the war years including paper and books, any scrap iron including ornaments, food went to feed pigs…nothing was wasted.

Despite rationing, the health of the nation was probably better in real terms than it is today, especially with refined sugars being a rarity. Wartime babies and their mothers received extra rations and supplements, cookery books on how to make nutritious meals for the family from the sparse ingredients, cooking demonstrations on how to make food stretch to fill hungry mouths. Staples that could be dried such as eggs and milk became a normal fare as other food supplies disappeared from the shops but there was some innovative substitutes for the many ingredients in the diet. Certainly obesity was not the issue it is today.

However it was interesting that even during wartime, with national unity at its peak, there were still those who found opportunities to take advantage of the bombing both in shops, industrial premises and in people’s homes.

This is just a glimpse of the fascinating information you will find in this in depth background to life during the war years and I can highly recommend for not just history buffs and writers but for anyone who had parents or grandparents who lived through these desperate years.

Read the reviews and buy the book: – Amazon UK And: Amazon US

Other books by Austin J. Ruddy

Read all the reviews and buy the books: Amazon UK – And: Amazon US – Goodreads – Twitter: @AustinRuddy 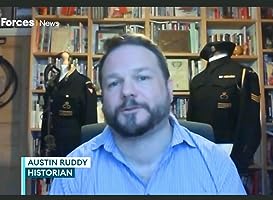 Born in North London in 1973, Austin J. Ruddy was educated at Highgate School and the University of Leicester, where he attained his degree in Archaeology.

He has studied and collected the social and military history of the Second World War, particularly the British Home Front, for most of his life.

Austin has been broadcast on radio and television talking about wartime history and regularly researches and writes for magazines, newspapers, journals and websites, as well as local talks on wartime defence history.

He was a volunteer fieldworker for the CBA Defence of Britain archaeology project, is a member of the Pillbox Study Group and supports various organisations, from the Royal British Legion to the Civil Defence Association.

For 20 years, he worked at the Leicester Mercury newspaper, including as the editor/writer of the popular ‘Mr Leicester’ daily local history page. He currently works at the School of Education at the University of Leicester and as a freelance writer, with a monthly article in Britain At War magazine, Britain’s best-selling military history monthly.

In 2020, Austin has had consultancy work with Leicester City Council’s Museums Service, providing objects and advice on an exhibition to mark the 80th anniversary of the city’s Blitz. He has also provided the research for two LCC Heritage Information Panels about Leicester’s ARP and wartime fire services.

Austin’s first two books, British Anti-Invasion Defences 1940-1945 (2004) the handbook of the Pillbox Study Group and To The Last Round: Leicestershire and Rutland Home Guard 1940-1945 (2007) were both well-received and reviewed across various media. His next large-scale research was Tested By Bomb and Flame: Leicester Versus Luftwaffe Air Raids, 1939-1945 (2014), which was the culmination of 15 years’ research and unpicked the myths and provided the true story of the Blitz on the Midlands city.

His latest book, The Home Front 1939-1945 in 100 Objects (2019), for Front Line/Pen and Sword Books, displays a wealth of everyday and previously unseen unique objects, the results of 35 years’ collecting, backed by useful dates, facts and figures, charting the impact the Second World War made on Britain and its people.

Thanks very much for dropping in today and I hope you will explore all of Austin J. Ruddy’s books, especially if you are writing historical novels during this period in the UK.