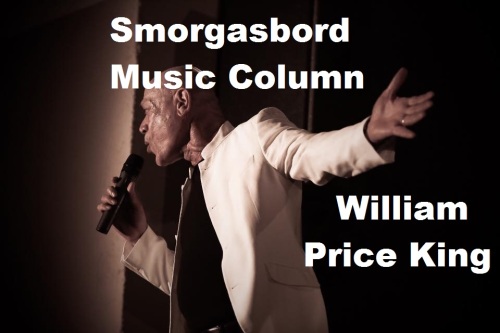 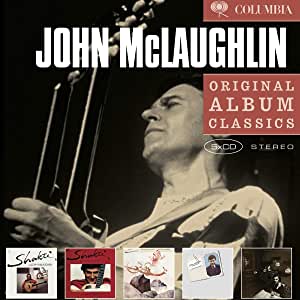 John McLaughlin is an English guitarist, bandleader, and composer. His music includes many genres of jazz combined with elements of rock, Indian classical music, Western classical music, flamenco, and blues. He is a pioneer of jazz fusion.

After contributing to several key British groups of the early 1960s, McLaughlin made Extrapolation, his first album as a bandleader, in 1969. He then moved to the U.S., where he played with Tony Williams’s group Lifetime and then with Miles Davis on his electric jazz-fusion albums In a Silent Way, Bitches Brew, Jack Johnson, and On the Corner. His 1970s electric band, the Mahavishnu Orchestra, performed a technically virtuosic and complex style of music that fused electric jazz and rock with Indian influences. Read more at : Wikipedia

Now time for some tracks from some of John McLoughlin’s albums.

“My Goal’s Beyond”, released on Douglas Records in 1971, is greatly influenced by Indian music and dedicated to Sri Chinmoy, McLaughlin’s spiritual guru. The first half of the album spotlights McLaughlin’s energetic acoustic guitar. There are three jazz standards and five original songs including the classic ‘Follow Your Heart.’ The second part of the album explores the intricate fusion of Indian rhythms, notably ‘Peace One’ and ‘Peace Two.’ The album features heavyweights Dave Liebman on flute and soprano saxophone; Billy Cobham on drums; and Jerry Goodman on violin. On Billboard’s Top 200 “My Goal’s Beyond” peaked at #194 and at #34 on their Jazz Albums Chart. Here is ‘Peace One‘ from the second part of the album.

“The Inner Mounting Flame” was recorded by the jazz-rock fusion band Mahavishnu Orchestra and released on Columbia Records in 1971. All of the original material was written by McLaughlin. Though this album was influenced by jazz improvisation, it is the rock element that predominates, reminiscent of the electronic innovations of Jimi Hendrix.
McLaughlin’s post-Hendrix edgy guitar riffs on the double-necked electric guitar and Jerry Goodman’s virtuosity on the violin are outstanding, not to mention Billy Cobham’s hard-charging drums, whose jazz-trained technique became the standard for all rock drummers. This album was designed for young rock fans and was very popular in its day. On Billboard’s Jazz Album chart it reached #11 and on their Pop Albums Chart it peaked at #89. The Mahavishnu Orchestra consisted of John McLaughlin on guitar, Rick Laird on bass, Billy Cobham on drums, and Jan Hammer on keyboards and organ. Here is Meeting of the Spirits from the album.

“Shakti”, released on Sony International in 1976, was recorded live at South Hampton College in New York State. This record presented a hybrid of jazz and far Eastern modes that helped set in motion the commercialization of ‘World Music’ by opening up the ears of many jazz-rock fans to sounds they had never heard before. « Shakti » created an amazing fusion with virtuosic guitar runs; unison playing among all the musicians; mesmerizing percussion duels between Hussain and Raghavan; and Shankar’s Far Eastern violin which matched McLaughlin’s guitar in call and response. All of this made « Shakti » one of the most exciting live albums around. “Shakti” peaked at #37 on Billboard’s Jazz Albums chart in 1976, and at #194 on Billboard’s Top 200.

“Friday Night in San Francisco” was recorded live by John McLaughlin, Al Di Meola, and Paco de Lucía at the Warfield Theatre on December 5, 1980, a musical event compared to that of Benny Goodman at Carnegie Hall in 1938 by critics. This album brings together three of the greatest guitarists at that time in a very relaxed and spontaneous performance, and has been considered one the most influential of all live acoustic guitar albums. This album is divided into three duo and two trio performances, filled with the fire and virtuoso that one expects from guitarists of this caliber at the peaks of their careers. The quality of the compositions and the sensitivity and dynamic variation coming from their performances stand out on this album and exemplifies the and artistry of these three great musicians. “Friday Night in San Francisco” peaked at #6 on Billboard’s Top Jazz Albums chart and #97 on Billboard’s Top 200 in 1981. Here is Mediterranean Sundance from the album.

You can listen to the full album here: Youtube

Buy the albums by John McLaughlin: Amazon US

To find out more and check for tour dates: John McLaughlin Official Site

Thanks for dropping in today and as always William looks forward to your feedback. Thanks Sally.