Welcome to the next post in the series Letters from America 1985 -1987 that I wrote home to my parents in the UK. My father kept them all in a folder and on his death they came back to me with a note to publish them.

We are now in to our first June and really hot weather in Texas. The swimming pool was the focus of the complex and we would meet a lot of wonderful people down there over the next two years. Many of the residents worked so it would be early evening or the weekends when we would gather and plastic cups of beer or wine were in plentiful supply.

I was feeling a little homesick and also trying to find new things to learn to occupy my mind. I had worked for a living since 14 so almost 20 years, at first after school and weekends and then full time after college from 17.. I was not used to being idle.

Thank you for the letter and photographs, Emma is looking very grown up and so like Sonia. I was delighted to see the physical evidence of your first caravan weekend. Are they going to put up a plaque above the door saying “Mollie Coleman Slept Here!”. You certainly have been having a busy time of it and I hope the book exhibition was a success.

David is away this week, Kansas, Washington and Minneapolis. He is in Washington trying to get official government approval for his cable spec. Once obtained it will make it a lot easier to get potential customers interested. He has just bought a computer for business use, which will make his work easier. He have been involved in these machines since the mid 1970s and it is amazing the difference in size from those he used to work with. He spent the weekend uploading programmes to it and then put a wrong piece of data in that wiped the lot and he had to start all over again! There was quite a lot of profanity issuing from the spare bedroom, so I took myself off to the pool!  Luckily these days they are more portable so he has now taken to the office and will no doubt be the envy of his less technically minded colleagues who still use paper the whole time. 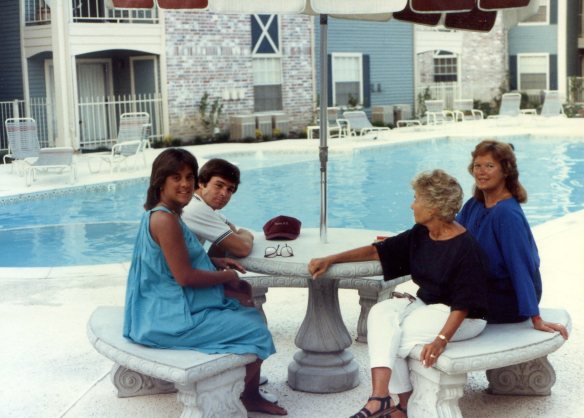 My friend Vicki is almost due and her mother arrived yesterday and her husband has taken time off work. My job as assistant coach looks redundant at the moment but I am on hand if needed! The baby would certainly be arriving to unpredictable weather. We had a three hour thunderstorm last night and it was in true Texas style. Nothing like our hour of rumbling in the skies with the odd flash of lightening. This was crashing, boulder rolling and forked lightening for the entire time. I have never seen lightening like it and watched from our balcony as it hit between the trees in our central garden area with an almighty crack.

The rain is torrential and having been caught out in one last week it is very frightening. The windshield wipers could not keep up with the amount of water even on the fast speed and in the end, like everyone else I had to pull over and wait for it to subside. The roads were also dangerous to drive on as it was easy to water plane across into oncoming traffic.

I had hoped that it might have cleared the air which has become very humid and suffocating. But no such luck.

I do still feel a little homesick but we are getting used to doing things in a slightly different way. I do miss not being able to walk out the gate and find pavements that I can walk around the block on or to the shops. You have to drive about a mile up the road to a row of shopping malls and restaurants to find a footpath and I think if we decide to move again later this year, we will bear that in mind.

We do love the pool because most of the time we have it to ourselves. Especially early in the morning. We both enjoy doing laps and that is not always easy in the late afternoons and early evenings as most people bring down their airbeds and have a quick dip then hop on and float around for an hour.  Still we have the best of both worlds and I am afraid that I too have succumbed by buying myself a rather substantial lilo… with a sit up bit at the end and cup holders… I must say it is rather relaxing when everyone is at work to float around with a cold drink, reading a good book and popping in to cool off from time to time.

I am looking forward to seeing you trying to get on and off gracefully when you are over later in the year… I will be taking pictures!

Love to you both Sally and David.

Thank you for dropping in today and I hope you will join me next week for another of our American adventures.  Thanks Sally