I have read some amazing books in the last twelve months and I would like to share them again with you, updated with the authors most recent releases and their biography.

Today I am sharing my review from February 2020 for Carol Balawyder  – A psychological thriller – Warning Signs: A novel about Obsession. 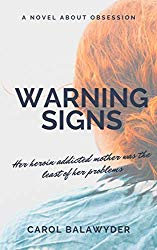 Eugene’s research into his criminal mind is not about the why, but how to prevent his horrific crimes. Angie, a young woman starving for passion sees Eugene as her saviour from a lonely life of caring for her heroin addicted mother. How far is she willing to go in order to save her relationship with Eugene and his promise for a future together?

Detective Van Ray is out on a vindictive mission as he attempts to solve the murders of young girls in Youth Protection.

Their lives collide in a mixture of mistrust, obsession and ignoring the warning signs. A psychological thriller about human frailty and loneliness.

This is definitely a novel about obsession. The serial killer with finding the source of his need to murder, the detective who has his own demons and is determined to track down the killer, and the vulnerable Angie who lost her childhood to the need to care for her addicted mother.

Clearly Carol Balawyder had researched the background for her characters in depth, and instead of presenting us with gory details, she slowly peels back the layers that both killer and victims have built up around childhood trauma and surviving in the ‘system’. We are all flawed but when does that become a full-blown obession with murder? Why these particular victims that are already vulnerable?

Eugene is aware of what he is, but researches other killers to find out why he has this need and how he might be stopped. Angie might just offer a way back from this madness, but is he expecting too much from her by putting the responsibility for his redemption on her fragile shoulders?

Detective Darren Van Ray has a gut feeling about Eugene but he has been wrong before and he now must get up close and personal to prove his case.

Carol Balawyder does an excellent job of keeping the pace and tension tight throughout the story, and there are some surprises along the way as the three individuals test their own strength against each other and what life throws at them.

If you would like to get into the mind of a serial killer and enjoy a subtle and carefully crafted thriller you will enjoy Warning Signs.

Read the reviews and buy the book : Amazon US  and: Amazon UK

A selection of books by Carol Balawyder

Carol was born in Quebec but now lives in Montreal. After studying Early Childhood Education and spending time amongst the mayhem that is called ‘Kindergarten’, she then went on to obtain a B.A. in Education so that she could teach in High Schools. After the often challenging task of introducing poetry to teenagers Carol moved on to teaching English as a second language.

Fast forward through a trip in her early 20s (involved working passage on a Norwegian cargo ship) to Rotterdam and then to the British Library Museum to read the heavily guarded original Lewis Carroll manuscript of Alice in Wonderland. Then on to Concordia University in Montreal to study Applied Linguistics to M.A level and the publication of ESL books Open For Business and Windows on Sci-Tech under the name of Carol Ann Foumier.

Then came the desire to pen crime novels, and aware that it is expected that these be accurate and factual, Carol obtained a M.Sc. in Criminology. However writing crime stories was put on the back burner, as Carol put her degree to good use, teaching Police Technology and Corrections for 18 years in a college in Montreal. (We all know where to go when we have a crime story line that is not panning out!)

For some people the connection between crime and dating is all too apparent particularly when getting back on the dating scene after a divorce. After a long term relationship the prospect can be daunting and fraught with pitfalls, humour if you can find it and perhaps the need to kiss a lot of frogs.

Thanks for dropping in today and I hope you have enjoyed my review of Carol’s book and will head over to Amazon to check out all of her work.. thanks Sally.