I have read some excellent books during 2021 so far and I am now sharing my reviews for the books from earlier this year…. good books deserve frequent showcases.

The UK’s new megacities: contented citizens relieved of the burden of home ownership, living in eco-friendly communities. Total surveillance has all but wiped out criminal activity, and biometric sensor implants detect illness even before symptoms are apparent.

That’s the hype. Scratch the surface, and darker stories emerge.

Tara is offered the chance to become a princess amongst media influencers—as long as she keeps quiet and does as she’s told.

Aileen uproots to the megacity with some reluctance, but none of her misgivings prepare her for the situation she will face: a mother’s worst nightmare.

Radar has survived gang rule in group homes for the homeless, prison and bereavement, and jumps at the chance to live a ‘normal’ life. But at what cost?

For all three, the price of living in a megacity may prove too high.

Megacity is the third and final book in the dystopian Operation Galton trilogy, and is Terry Tyler’s twenty-third publication.

‘As long as some of us are still living free, they have not yet won. Anyone who refuses to live as they want us to has beaten them. That’s how we do it. That’s how we win.’

There is always anticipation when Terry Tyler announces a new release, and having read both Hope and Wasteland, the first two books in the trilogy, Megacity was eagerly awaited.

The author’s version of the future, following a mysterious and fortuitous pandemic, makes for thought provoking reading. The characters Tyler has cleverly crafted could be a member of your family or a neighbour, and it is easy to become invested in their lives and challenges. They are strong and often flawed but most of all they are memorable.

There is little you can do when those in positions of power have narcissistic and psychotic tendencies. They manipulate and deceive from behind a facade that is charming and enviable. Those who have been lied to all their lives and come from desperate living conditions, are perfect prey for these elite, and the price most of them will pay is beyond inhuman.

But there is hope, as those who defy the increasing institutionalisation, and eradication of free will, form groups and networks to spirit some lucky souls to freedom. Away from the technical tethers and government lackeys that watch and monitor every move and emotion in the Megacities. And it is the hope that the author weaves through the story, which keeps you turning page after page as you follow the lives of three victims of the new order.

There are moments when you shudder as you read to what lengths the depraved will go to achieve money and power. There are also times when you weep for the desperate plight of those who blindly accept the promises made offering them a better future. The one thing this book is not short on is emotion.

This is a thriller, a coming of age of a young woman caught up in the evil, affirmation of a mother’s love, the redemption of a lost soul, and the courage of ordinary individuals who are willing to stand up and say ‘No more’.

Although a version of the future that hopefully will never happen, it is a reminder to us all that we need elect the best and most honest leaders. Not an easy task when the public face shown to the world sometimes hides a dangerous truth.

I can highly recommend the trilogy, portraying a very different Britain to the one we are lucky enough to inhabit today. 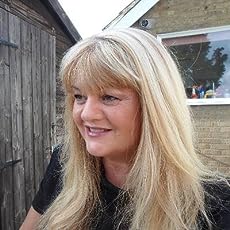 Terry Tyler is the author of twenty-two books available from Amazon, the latest being ‘Megacity’, the final book in the dystopian Operation Galton trilogy. Also published recently is ‘The Visitor’, a post-apocalyptic murder mystery set in the same world as her popular Project Renova series. She is currently at work on a psychological thriller that centres round an internet dating con, but has not yet finished with devastated societies, catastrophe and destruction, generally. Proud to be independently published, Terry is an avid reader and book reviewer, and a member of Rosie Amber’s Book Review Team.

Terry is a Walking Dead addict, and has a great interest in history (particularly 12th-17th century), along with books and documentaries on sociological/cultural/anthropological subject matter. She loves South Park, the sea, and going for long walks in quiet places where there are lots of trees. She lives in the north east of England with her husband.

Thanks very much for dropping in today and I hope you will be leaving with some books..thanks Sally.