The Garden Black poetry collection is a venture into fantasy and speculative fiction based on the dual themes of rain forest and fantasy.

. The rainforest becomes a desert, and then the sea.

. A man in a satellite orbits the earth while playing his violin and pondering. A girl gazes up at the passing light and dances.

. Od Ovo – a youth who is from here, raises the dust of frustrated boredom on a mining asteroid, and cannot believe traveller tales of places where water falls from the sky.

. What colour are the flowers in the Reaper’s garden? They are all colours . . . They are black.

Welcome to the speculative fantasies that are The Garden Black.

marjorie mallon 5.0 out of 5 stars Excellent Speculative Fantasy poetry  Reviewed in the United Kingdom on 8 May 2022

Thank you to poet Frank Prem for an advanced copy of The Garden Black. It seemed the perfect opportunity yesterday to read this poetry collection while I was relaxing on a beach! It’s a little different from some of Frank’s other collections with a speculative fantasy vibe to it. Being a keen fantasy reader and author I enjoyed it. Frank’s free verse form of poetry is always a delight, easy to read and enjoy and reflect upon.

My favourite poems with their titles below:

I who am, (I liked this for its references to: wind, sun, dark, soil, leaf, bough, root, bark, sap, wood, tree!)
the hunter writes a letter
swell, (this poem relates swimming to driving!)
storm and the sea (bubbles of foam)
I dig (a forest)
it is not clear (from the dream below)
a song for the (far) horizon
a line of destiny
pain control
garden black
isosceles and me (and the war over the pond,) – very unusual but in a good way!
davey’s interview (pre-recorded)
in the stone: through the water
a song for the (deep) horizon
the second beat.

A selection of books by Frank Prem

Frank Prem has been a storytelling poet since his teenage years. He has been a psychiatric nurse through all of his professional career, which now exceeds forty years.

He has been published in magazines, online zines and anthologies in Australia, and in a number of other countries, and has both performed and recorded his work as spoken word.

He lives with his wife in the beautiful township of Beechworth in North East Victoria, Australia.

The second book today is the biography of Geoffrey Pett, a pioneer flying boat establishment in Africa in the 1930s and during the second world war. Written by Jemima Pett from recordings made by her father, White Water Landings. 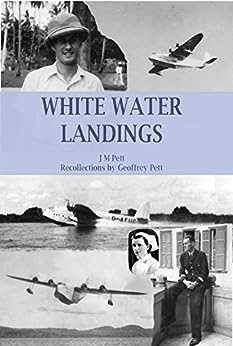 Geoffrey was often sought out for his memoirs of Imperial Airways in Africa. After his death in 2005, he left a box of memorabilia including his photograph album and a set of tapes dictated between 1995 and 2004. His daughter, J M Pett, has laboured over the contents, producing this book to place the information out in the wider world. More content and links to archive material are on the website Geoffrey’s Box WordPress

Praise for White Water Landings:
a remarkable and significant piece of aviation and colonial history… shining through his memoirs is a capacity to ‘make do’…, and the sense of the Imperial ‘family’ as a source of identity, support and obligation away from home. … he reveals anxiety and frustration,cynicism for arbitrary authority… Told fondly, plainly and modestly, with touches of humour, Geoffrey’s story reads easily and lingers long. The text is equally delightful as family history, autobiography, and colonial history.” — Professor Gordon Pirie, Deputy Director of the African Centre for Cities, University of Cape Town, and Editor of the Journal of Transport History

As we hop on and off planes with destinations around the globe, we rarely think further than checking the timings and paying with our credit card. Most long distance flights are non-stop and it is now something we very much take for granted.

Imagine you need to make the trip from the UK to Capetown by air in 1936. It would have required several short hops by flying boat down across Europe to the top of Africa and then to several refuelling stops set up on the coast or rivers over the 3,500 miles to the tip of the continent.

This biography of the young Geoffrey Pett is fascinating, both from a historical perspective and also because of his passion and perserverance in setting up these isolated and sometimes dangerous stations along the route.

Geoffrey was clearly adaptable and resourceful, making connections both with local residents and those from other companies and the military that passed through his care. Whilst his mandate was to establish the stations for Imperial Airways, he understood the benefits of working well with others. It was complex with very basic communications to maintain contact with aircraft to ensure safety and a rigid schedule that had to be met to ensure continuity of flights across the length and breadth of Africa.

As you read the story, it is easy to imagine you are sitting across from a natural storyteller listening to his adventures. And there are plenty of those including following hippo tracks to access suitable river landing sites, hauling barges and launches hundreds of miles across country and upriver that were virtually unnavigable. Dealing with some quirky passengers unaccustomed to rudimentary overnight facilities, dealing with snake-bites, and those who have enjoyed the hospitality a little too vigorously.

It is also a love story, and how the ingenuity and tenacity that Geoffry applied to his job, was put to good use as he masterminds a trip to reach the girl he loves in Uganda, marry her, take a honeymoon and be back by an almost impossible return to work date.

The author has done a great job in transcribing the recordings made by her father, keeping the authenticity of his narration and adding in helpful links between stories. Jemima Pett also shares her parent’s life after the war including Geoffrey’s contintued career in aviation.

Recommended for history lovers, aviation buffs, and those who enjoy finding out about ordinary people leading an extraordinary life.

Read the reviews and buy the book:  Amazon UK– And: Amazon US

When I discovered the words ‘portfolio career’ I realised I was trendsetter – having not only a number of different jobs, but in totally different fields. These included social work, business management, computer technology, environmental research. The thread running through all of them was communication – and that continued in my spare time with writing and editing club magazines, manuals, reports… I loved words, loved to learn and to apply my learning to the real world.

Eventually the world just wasn’t big enough, and so I went back to inventing my own, as I had as a child. First came the Realms, the setting for the ten-book Princelings of the East series. It’s a feudal England run by princes in castles who just happen to be guinea pigs – although you can read them as people equally well. Then came the Viridian System, a planetary area on the outskirts of known space where a frontier mentality mixes with big business and tourism.

I wrote some shorter stories featuring characters from the Princelings series, recently published as Messenger Misadventures. This features Dylan and Dougall, and their friend Deirdre, who unfortunately did not feature with them in Book 8 of the Princelings series. Two more characters that are asking for their own book are Roscoe and Neville, who turn up in book 10.

2021 saw the publication of five short story collections. Most of these originally appeared on my blog between 2012 and 2020, but are no longer there. Several new stories appear, especially in the seasonal special Snowflakes and Shivers. I still blog short stories, usually once a week.

The third and final Viridian System book was published in Feb 22. There’s a snippet at the end of that which may lead to another scifi story, but not set in the Viridian System.

Thanks for dropping in today and I hope you will be leaving with some books.. thanks Sally