I know that New York in particular has had a very tough time during the pandemic and I thought today in this movie themed music column that I would pay the city tribute with the song New York, New York, sung by Frank Sinatra for the film On the Town.

We have visited this cosmopolitan and bustling city several times and hope that it regains its pizzazz soon.

About On the Town

On the Town was released in 1949 with music by Leonard Bernstein and Roger Edens with lyrics by Betty Comden and Adolph Green. It was an adaptation of a Broadway musical in 1944, which was itself an adaptation of a Jerome Robbins ballet entitled Fancy Free.

The film was directed and choreographed by Gene Kelly and Stanley Donen, and starred Gene Kelly, Frank Sinatra, Betty Garrett and Ann Miller.

The plot is light but certainly entertaining. Three sailors on shore leave in New York are on the subway when one of them falls in love with a poster of Miss Turnstiles… they spend the next 24 hours racing around New York to find her.

The film won Oscar for Best Music- Scoring of a Musical Picture and was nominated for a Golden Globe Award for Best Cinematography (colour). The Screenwriters won the Writers Guild of America Award for Best Written American Musical.

Here is Frank Sinatra and New York, New York thanks to Batuhan Karaarslan

More information on the film: Wikipedia 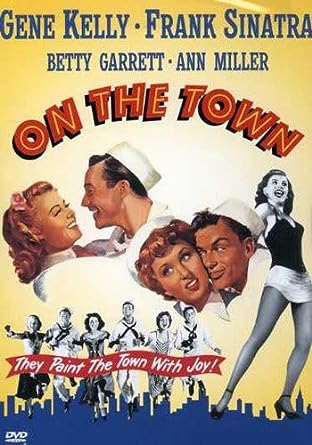 Buy the film: Amazon US – And: Amazon UK

Thanks for dropping in and I hope you have enjoyed this week’s Movie Music and as always your feedback is very welcome…thanks Sally.

37 thoughts on “Smorgasbord Music Column – Songs from the Movies – On The Town – New York, New York by Frank Sinatra”