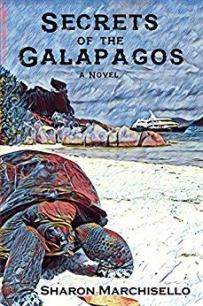 Shattered by a broken engagement and a business venture derailed by Jerome Haddad, her unscrupulous partner, Giovanna Rogers goes on a luxury Galapagos cruise with her grandmother to decompress.

At least that’s what her grandmother thinks. Giovanna is determined to make Jerome pay for what he’s done, and she has a tip he’s headed for the Galapagos.

While snorkeling in Gardner Bay off the coast of Española Island, Giovanna and another cruise passenger, tortoise researcher Laurel Pardo, both become separated from the group and Laurel is left behind. No one on the ship will acknowledge Laurel is missing, and Giovanna suspects a cover-up.

When the police come on board to investigate a death, Giovanna is sure the victim is Laurel. She’s anxious to give her testimony to the attractive local detective assigned to the case. Instead, she learns someone else is dead, and she’s a person of interest.

Resolved to keep searching for Laurel and make sense of her disappearance, Giovanna finds that several people on board the cruise ship have reasons to want Laurel gone. One is a scam involving Tio Armando, the famous Galapagos giant tortoise and a major tourist attraction in the archipelago. And Jerome Haddad has a hand in it. Thinking she’s the cat in this game, Giovanna gets too involved and becomes the mouse, putting her life in jeopardy. But if she doesn’t stop him, Jerome will go on to ruin others.

Jjspina5.0 out of 5 stars An Enjoyable Mystery and Trip to the Galapagos without leaving home!

The author takes the reader on an adventure with mystery, suspense and danger at every turn for the main protagonist, Giovanna Rogers. She intertwines some romance, intrigue, and murder. She catalogs the list of endangered species there with some fascinating information about turtles which I enjoyed. Giovanna has not gotten over losing her business and her fiancé because of a con artist. This trip may give her a chance to get even with this con artist who is also on his way to the Galapagos.

Even though I have never visited the Galapagos I felt as if I were there. The characters were varied and interesting keeping this reader engaged until the satisfying conclusion. I would recommend this story for all who enjoy learning about fascinating places along with an enjoyable mystery.

Head over to find out more about Sharon Marchisello and buy the books: Amazon US – and: Amazon UK – follow Sharon: Goodreads – blog: Sharon Blogspot – Twitter: @SLMarchisello

The next book today is Gwen M. Plano with The Culmination: a new beginning – this is the third book in the exciting The Contract thriller series.

The Culmination, a new beginning is the third book in The Contract thriller series. After an assassination attempt on an Air Force base in northern California, tensions mount. Heads of state meet to craft a denuclearization agreement. The meetings between these nuclear powers take a murderous turn. A nefarious conspiracy re-emerges and leads the characters into the heart of the Middle East, where they encounter the unexpected and find a reason for hope.

One of the  reviews for the book

Mae Clair 5.0 out of 5 stars A Political Thriller with Strong Characters

Book three in a series, The Culmination reads easily as a standalone novel. A political thriller, that addresses denuclearization, tensions in the Middle East, and the fate of refugees, much of the story echoes current headlines. The plot is complex involving multiple heads of state, along with the strategical give and take of political maneuvering on a global level. The author clearly put an extensive amount of research into this book, and it shows. Adrenalin-fueled scenes alter with more cerebral moments, and even a few romantic interludes.

I especially loved the evolution of the relationship between the two central characters, Margaret Adler, VP of the United States and Ivan Smirnov, acting President of Russia. During the course of the novel those titles change, and we learn more about each, including richly developed backgrounds. I was thoroughly invested in the difficulties Margaret and Ivan faced, both on personal and political levels. Their scenes together were among my favorites of the book. There’s also a young refugee child who factors into the story and who stole my heart.

A unique combination of character-driven and plot-driven fiction, I recommend this compelling tale to readers who enjoy strong character development and complexly-plotted intrigue.

Other books by Gwen Plano

The final book today is the latest release from Ailish Sinclair… the historical romance Sisters at the Edge of the World.

When Morragh speaks to another person for the very first time, she has no idea that he is an invader in her land.

What she does next constitutes a huge betrayal of her people, threatening her closest relationships and even her way of life itself.

As the conflict between the Caledonian tribes and the Roman Sons of Mars intensifies, can she use her high status in the community to lessen the coming death toll or even prevent outright war?

Set in 1st century Northern Scotland, SISTERS AT THE EDGE OF THE WORLD is a story of chosen sisters, fierce warriors, divided loyalties and, ultimately, love.

Terry Tyler 5.0 out of 5 stars Excellent!

What a marvellous book this is. I read it quickly, trying not to whizz through it once I got to the last twenty percent! The title refers to the relationship between Morragh and her sister, Onnagh; they are not birth sisters. Morragh was treated in the most brutal way as a young child, and Onnagh saved her.

The notes at the back of the book tell of the historical facts and theories on which Ms Sinclair has based this story. It takes place in a time before Christianity, when the ancient Scottish Taezali tribe believed in pagain spiritual presences. Morragh, in whose voice the tale is told, is mute – until the events of one spring and summer change her life and that of her community; the men from Rome have travelled north to conquer their villages and challenge every aspect of their existence.

Morragh is blessed with second sight and acute intuition; she is also able to see what might take place in the future. I love this aspect of the book – I am not usually a fan of the fantastical or supernatural, but her gift felt oddly real. Possible.

It’s a fabulous story, a real page-turner and so well written. It made me think about the passage and circle of time, of the constancy of the land on which we live and the transient nature of human life. Loved it.

Thanks for dropping in today and I hope you will be leaving with some books.. Sally