I was delighted to review the historical novel set in South Africa during the Boer War,  A Ghost and His Gold by Roberta Eaton Cheadle 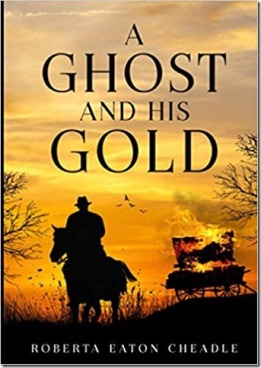 After Tom and Michelle Cleveland move into their recently built, modern townhouse, their housewarming party is disrupted when a drunken game with an Ouija board goes wrong and summonses a sinister poltergeist, Estelle, who died in 1904. Estelle makes her presence known in a series of terrifying events, culminating in her attacking Tom in his sleep with a knife. But, Estelle isn’t alone. Who are the shadows lurking in the background – one in an old-fashioned slouch hat and the other, a soldier, carrying a rifle?

After discovering their house has been built on the site of one of the original farms in Irene, Michelle becomes convinced that the answer to her horrifying visions lie in the past. She must unravel the stories of the three phantoms’ lives, and the circumstances surrounding their untimely deaths during the Second Anglo Boer War, in order to understand how they are tied together and why they are trapped in the world of ghosts between life and death.

As the reasons behind Estelle’s malevolent behaviour towards Tom unfold, Michelle’s marriage comes under severe pressure and both their lives are threatened.

This was certainly an ambitious project from a number of perspectives. The fusion of paranormal and history with two stories running in parallel is a challenge, but the author has succeeded in writing a flowing saga spanning 130 years. All the characters are excellently crafted and are memorable..

Usually it is left to the victors to write the history of wars, but that means you get the abridged truth and their own atrocities and failures tend to be skirted over. In this account of the Second Boer War between 1899 and 1902, both sides of the conflict are represented by two soldiers, enemies, but united in death by a need for resolution and forgiveness. They share the unabridged truth from their individual perspectives of the military and civilian devastation that occurs during this period, and it makes for sombre reading.

Their accounts of the conflict have been meticulously researched and provide a compelling behind the scenes background, not just to the military victories and defeats, but the appalling impact on whole families, the Boer way of life and Africa’s future. Those who worked the land with their native farm workers saw treasure in the earth and in the animals that grazed the grasslands, and fought for the right to retain their rights. The British Army was sent into battle to secure what lay beneath the ground for politicians who wanted gold and to remove the right to autonomy.

Men on the front line from both sides suffered from ineffective leadership and devastating losses but the conflict spread uncontained across the veld due to the scorched earth policy which destroyed farms and livestock, leaving nothing for the Boers to return to. Families were incarcerated in concentration camps lacking the basic human needs leading to the deaths of thousands of women and children from starvation and disease..

Running parallel to this personal account of two men caught up in this vortex, is the story of a modern day couple living on the land once a thriving Boer farm. The earth holds secrets and the house, now built over the rubble of its troubled past, also contains an unresolved mystery. One that has attracted the attention of another ghost who is not seeking forgiveness but revenge.

The author manages the various threads of the story with skill, weaving them back and forth across the loom of time. She brings them together for a dramatic climax which will shake the foundations of the future, as the dead and living claim their right to be heard.

A small selection of other books by Robbie and Michael Cheadle and as Roberta Eaton Cheadle.

I am a South African writer specialising in historical, paranormal and horror novels and short stories. I am an avid reader in these genres and my writing has been influenced by famous authors including Bram Stoker, the Bronte sisters, Amor Towles, Stephen Crane, Enrich Maria Remarque, George Orwell, Stephen King, and Colleen McCullough.

I have worked in corporate finance from 2001 until the present date and have written seven publications relating to investing in Africa. I have won several awards over my twenty year career in the category of Transactional Support Services.

I have been published a number of anthologies and have two published YA books, While the Bombs Fell and Through the Nethergate. I have recently published my first adult novel called A Ghost and His Gold which is partly set in South Africa during the Second Anglo Boer War.

Thanks for dropping in today and I hope you will head over to buy Robbie’s latest book.. thanks Sally