A modern day, shapeshifting sheriff. He’s the sheriff of a sparsely populated county in Montana. His blood brother and childhood best friend is Chief of Police on the Blackfoot Reservation, but they no longer speak. His deputy is a southern transplant with the body of a high-priced call girl, a voice of honey and mouth of a trucker. And if that’s not enough, he’s got a secret that would stun those that know him best. Other than that, it’s business as usual for Sheriff Mateo Grey.

One of the many reviews for Mateo’s Law

D.L. Finn 5.0 out of 5 stars I hope more stories are coming with these characters!  Reviewed in the United States on May 5, 2020

“Mateo’s Law” is an exciting paranormal, western romance that I read in two sittings. It is set in a small town in Montana, where Blair moved to join the force as a deputy. She is in a long-distance relationship but is attracted to the sheriff, Mateo. When something attacks a town resident, they investigate it together, but Blair is unaware of Mateo’s secret of being a shapeshifter. I love it when Mateo is in his alternative form, and I felt his freedom. The scenery is lush and the town a place I’d want to call home. Blair and Mateo have great chemistry, conversations, and working relationship. I was definitely rooting for Blair and Mateo and hope more stories are coming with these characters. If you love a paranormal page-turning romance, you won’t want to miss this!

Read the reviews and buy the book: Amazon US – Amazon UK

A small selection of Sandra’s other books

The next author today is Science Fiction and Fantasy author Richard Dee with the first in the Andorra Pett adventures. The Oort Cloud Cafe...I have read a number of books by Richard and can recommend you check out his extensive library of novels and short stories. 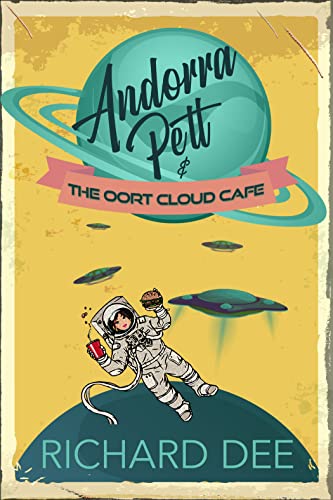 Andorra Pett shouldn’t have been in space, solving crime. It was all Trevor’s fault.

When Andorra Pett catches Trevor and her best friend, Maisie, together, her first instinct is to get away.

She’s headed for a space station, mining the rocks in Saturn’s rings. That ought to be far enough for a new start.

In a career change, she’s running a café. Then she discovers the body of the previous owner, hidden in the freezer.
Apparently, he had a book, filled with gossip and secrets. Everyone wants a look at that.

As well as running the café and learning to live in space, Andorra needs to turn detective and find it, before anyone else does.

Or she might be the next one for a long, cold, sleep.

One of the many reviews for the book

Book Squirrel5.0 out of 5 stars Excellent sci-fi mystery! Reviewed in the United States on March 4, 2020

Andorra and her best friend Cy are fabulous as the lead characters in this entertaining science fiction mystery story that takes place on a space station operating on the rings of Saturn.

Dee writes with a natural and relaxed style, infused with humour and observant insight into human behaviour and responses.

The story itself is well-crafted, immersing the reader in the station’s community and keeping them guessing with well-executed twists and clever diversions woven seamlessly into the plot.

The world building is original and complex, opening the reader’s imagination to the vast possibilities of life beyond our own world.

The cast of characters and their individual personalities, quirks and motivations remind the reader that people are the same wherever you go, which is why the premise and assumptions of the story work so well.

This is a most enjoyable read that will appeal to lovers of sci-fi and murder mysteries alike.

A small selection of other books by Richard Dee

A native of Brixham in Devon, Richard Dee’s family left Devon when he was in his teens and settled in Kent. Leaving school at 16 he briefly worked in a supermarket, then went to sea and travelled the world in the Merchant Navy, qualifying as a Master Mariner in 1986.

Coming ashore to be with his growing family, he used his sea-going knowledge in several jobs, including Marine Insurance Surveyor and Dockmaster at Tilbury, before becoming a Port Control Officer in Sheerness and then at the Thames Barrier in Woolwich. In 1994 he was head-hunted and offered a job as a Thames Estuary Pilot. In 1999 he transferred to the Thames River Pilots, where he regularly took vessels of all sizes through the Thames Barrier and upriver as far as H.M.S. Belfast and through Tower Bridge. In all, he piloted over 3,500 vessels in a 22-year career with the Port of London Authority.

Richard was offered part time working in 2010, which allowed him to return to live in Brixham, where he took up writing and blogging. During this time, he also set up and ran a successful Organic bakery, supplying local shops and cafés. The urge to write eventually overtook the urge to bake but Richard still makes bread for friends and family. Richard is married with three adult children and two grandchildren.

Thanks for dropping in today and I hope you will be leaving with some books…thanks Sallyl.