Elaine lay under the warmth of the duvet and her hand crept across the mattress to touch her husband’s hand. Not enough to wake him but just a gentle touch to remind her of his presence. Jack’s even breathing and gentle snore was comforting and Elaine smiled to herself, savouring the delicious secret that she was desperate to reveal.

She had been saving up the news until today as a gift for Jack’s birthday. They had been married for two years and she knew that his greatest wish was for them to have a baby. His large family had already provided his parents with six grandchildren, and whilst he might not talk about his desire for a family; he wanted to hold their child in his arms almost as much as she did. She had remembered the look on his face when she had thought that she might be pregnant but it had turned out to be a false alarm. This is why she had waited until she was absolutely sure; today would be the perfect time to reveal the secret.

Jack stirred beside her she turned her face in anticipation of his usual morning kiss on her brow and lips.

‘Good morning my darling,’ he gently stroked some stray hairs out of her eyes. ‘How are you today?

Elaine smiled at him lovingly and touched the tip of his beautiful nose. ‘Happy birthday my darling,’ and she leant over to kiss his mouth.

Over breakfast they discussed the final details of the birthday party that afternoon. Jack’s family lived too far away to attend, but he had asked one of their neighbours from down the street to join them. Jessica was always in and out and would pop in for coffee most mornings when Jack was at work. Sometimes she would also bring her children in at the weekend and they had a wonderful time playing scrabble and cards.

Elaine had butterflies in her stomach as the urge to blurt out her special secret became too much to bear. It had to be the right moment, when Jack was cutting his birthday cake that Jessica had kindly made for him. She was a much better baker that she was and it looked amazing. Jack had been in the navy when they met, and on top of the white and blue cake, a figure in a sailor’s uniform posed with an anchor. Elaine bet the inside of the cake would be delicious and would taste all the better when she announced her news.

After a quick sandwich for lunch and whilst Jack tidied the living room ready for the party, Elaine popped upstairs quietly to their bedroom and sat at the dressing table. She smiled to herself as she viewed her reflection in the mirror. There was no doubt about it; her skin had a definite glow. Artfully she brushed her blonde hair into a smooth bob and applied her makeup carefully. Not too much, but just enough to enhance her youthful beauty. Laid out on the bed were three outfits and Elaine was having problems deciding which to wear. Jack would always laugh about her preparations for an evening out. He knew she would try on all the options a couple of times before making her final choice.

This kept her busy for the next half hour and eventually she headed downstairs in her favourite cream dress with pearls at her neck and in the lobes of her ears. Jack took her hands and stepped back for a better look.

‘You look stunningly beautiful sweetheart,’ he gently straightened the string of pearls around her neck; they had been his wedding present to her.

Elaine almost gave the secret away at that point but held the temptation in check. Her plan was perfect and she must wait a little longer until it was time for him to blow out his birthday candles.

Jack left her sat in the lounge, surrounded by plates of neatly cut sandwiches and a pile of festive napkins. In the corner on a cabinet sat the cake surrounded by the birthday cards that had arrived over the last two or three days.

Just then the doorbell rang and it startled Elaine as the sound intruded into her secret daydreams. She pushed herself out of the chair and headed for the hall. Jack was coming down the stairs and held out his hand to her.

‘Don’t worry love I’ll get it,’ and he opened the door to find their three guests on the doorstep.

In they came, bearing brightly coloured bags of gifts and contributions to the birthday tea.

There was much hugging and chatter as overcoats were dispensed with and they all headed into the living room. Jack and Jessica took the food she had brought into the kitchen and put the kettle on. Sophie and Ben, who were in their early teens, entertained Elaine with tales of their antics at school during the week.

The food disappeared rapidly and two pots of tea later it was time to cut the cake. This was Elaine’s moment and she stood up to join Jack at the cabinet as he prepared to slice into the blue and white icing.

‘Darling, I have a very special birthday present for you,’ she held out the envelope that clearly contained rather bulky contents. Jack smiled at her eager face and proceeded to open the envelope carefully. He drew out the birthday card that had a huge heart on the front and carefully opened it to reveal the surprise. In his hand were a pair of knitted baby booties decorated with white satin ribbon.

Tears formed in the corners of his eyes as he pulled Elaine to him. ‘Thank you darling for the best birthday present I have ever received.’ Over her shoulder he smiled at their guests and they nodded and smiled in return.

Jessica’s children helped clear away the plates and carried them into the kitchen whilst their mother sat on the sofa holding Elaine’s hand. ‘That is wonderful news and I am so happy for the both of you.’ she smiled gently at the woman at her side. ‘We can talk about it on Monday when I pop in for coffee and we’ll get the baby knitting patterns out to look at.’

An hour later and Jessica kissed Elaine on the forehead and gently stroked her cheek. She headed off to the hall and gathered up the coats and handed them out to Sophie and Ben.

When she reached the front door, she turned once more and gave Jack a warm hug and whispered in his ear. ‘It was a wonderful birthday tea Dad and I will come in as usual on Monday when you go out to do the shopping.’

Jack went back into the lounge and stood for a moment looking at his wife, sitting calmly watching the flames flickering in the fireplace. The outfit that Elaine had finally chosen was her wedding dress, and she looked as radiant today as she had forty years ago. He sat beside her and gently moved some stray silver hairs from her forehead and took her face in his hands. He looked into her sparkling blue eyes that no longer recognised her daughter or grandchildren.

The most precious birthday present he had received today, was that his beautiful Elaine still knew him, and that even in the darkness, her light continued to shine brightly.

One of the reviews for the collection.

Aug 16, 2018 Colleen Chesebro rated it five stars it was amazing

I love short story collections. There is something about the brevity of words that appeals to my senses, especially when there is a theme that we all can relate to. Think about it. We all have a name, but many of us have no idea why our parents chose that name or the possible stories behind that name.

Sally Cronin tackles this naming issue. In “What’s in a Name,” each chapter is titled by the name of its main character, leading the reader on a journey of discovery. Every name has a tale to tell, and under the brilliant creativity of this author, each name takes on a personality of its own.

My favorite story was that of “Diana,” a kind woman who choose a husband that proved to be a scoundrel in every sense of the word. With a little help from her family, Diana reaches into her heart and finds the courage to stand up to her husband’s abuse. The pacing of this story is marvelous and carries the reader to a satisfying end.

This compilation of stories covers a wide range of genres. There is something here for everyone. I read these stories a few at a time, savoring the emotions the stories evoked within me. This was my first read by this author, and I look forward to more of her writing. I was thrilled to find that the second volume of “What’s in a Name ~ Tales of Life & Romance,” had already been written. Needless to say, I’ve already purchased my copy. 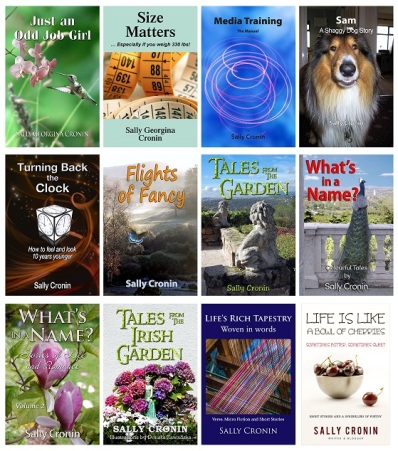 I hope you will join me next Sunday for the next story in the collection… thanks Sally.

40 thoughts on “Smorgasbord Short stories Rewind – What’s in a Name? Volume One – Elaine – A Shining Light by Sally Cronin”