In this series you are invited to share an extract of 500 words from your most recent book published within the last 12 months. Details at the end of the post.

Today an extract from Matilda Windsor is Coming Home a contemporary novel by Anne Goodwin. A book that I can also recommend

“In the dying days of the old asylums, three paths intersect.

A brother and sister separated for fifty years and the idealistic young social worker who tries to reunite them. Will truth prevail over bigotry, or will the buried secret keep family apart?

Told with compassion and humour, Anne Goodwin’s third novel is a poignant, compelling and brilliantly authentic portrayal of asylum life, with a quirky protagonist you won’t easily forget. Published by Inspired Quill.”

An extract from Matilda Wilson is Coming Home

The cushion sighs, squashed by a body sinking into the seat beside her. Matty scrunches her already-closed eyes. She does not care for distractions when she has a recital to prepare. And, never able to anticipate when she might be called on to deliver her lines, her day spools out as one continuous rehearsal. Matty’s burden weighs heavily upon her, but she bears it with grace.

A whiff of lavender, but this is not her mother. Matty has been deceived before. The breath is too loud, too erratic. A smoker’s lungs. Matty tilts her head away. Unmoored from the monologue, she is obliged to return, silently, to the start.

Hands folded in her lap, she conjures her mother behind closed eyelids. Mouthing the words from alongside the orchestra pit, her features contorted to magnify the shapes of the vowels. Matty smiles inwardly, as confidence courses through her bloodstream.

Although she can reel off the words as readily as her name, her mother’s prompting spells the difference between fourth place with nothing to show for it and a silken rosette.

It cannot be anything important: her stomach signals it is too soon after luncheon for afternoon tea. Poetry pattering in her brain, she clenches her lips as if forming knots in party balloons.

Swallowing her vexation, Matty opens her eyes. A maid has a cardboard box in her arms and a small brown suitcase by her feet. “Are you leaving us, dear?”

The maid laughs, baring her teeth, which are in tiptop condition, remarkably so given the lack of affordable dentistry for the lower ranks. “No, but you are. They’ll be coming any minute from Tuke House.”

“Tuke House?” Matty knows of the Palladium and the Royal Albert Hall. She knows of the Folies Bergère, despite its salacious reputation. She has never heard of Tuke House.

“Thank you, dear, but the current arrangements are tickety-boo.”

As the maid flashes her teeth again, Matty studies her maw for a wink of precious metal. The prince gave her mother a pair of gold molars to match her wedding band, but when Matty’s were due for renewal she’d made do with plastic.

“We packed your things this morning, remember?” Dipping into the box, the maid parades the bric-a-brac piece by piece: a chunky book with a crucifix on the cover; a crumpled brown-paper bag of chewies; a conker; a poorly-composed photograph of a boy balancing the Eiffel Tower on his head. Is this one of her mother’s parlour games?

“You’re going up in the world, Matty Osborne.” Intent on memorising the contents of the box, Matty failed to notice the housekeeper encroaching. “Seems you’re too good for us now.”

I am? The housekeeper is never uncertain. Never wrong. If she thinks Matty is leaving, it would be unwise to contradict her.

Fishing in her pocket, Matty produces a palmful of coins. “Will this do for the taxicab?”

“Save your coppers for jelly babies,” says the housekeeper.

One of the excellent reviews for the book on Goodreads

Oct 25, 2021 Alex Craigie rated it five stars it was amazing

What a stunning book!

Matilda Windsor is Coming Home has two timelines and is told from the perspective of three main characters.

The most compelling voice for me was that of Matty herself. Her scant timeline begins in 1931 and leads to her unforgivable incarceration in an asylum on the grounds of ‘moral turpitude’. Broken by decades of institutionalisation when the ‘inmates’ were controlled by medication, given no choices or allowed even to express themselves, we follow her confused thoughts as she meanders through her days. I loved Matty’s take on things. She sees herself as a grand dame making the best of things during WWI and Anne Goodwin has done an amazing job of letting us see what’s really happening behind Matty’s interpretation of events.

Janice and Henry are on the short timeline that begins in 1989.

The 1980s saw the drive to close these asylums and bring in Care in the Community to replace them. The first of these closed in 1986. Janice is a newly-qualified social worker assigned to a closing home with a view to helping the residents adjust. She’s another wonderfully drawn character and her determination, compassion and understanding shine a light on present and past horrors of the system.

Henry is Matty’s brother. Not much younger than Matty herself, he has spent his life trying to track down the sister who cared for him like a mother.

I don’t want to give away any spoilers, but suffice it to say that the characters were finely drawn and the plot delivered surprises, distress and delight.
Highly recommended.

Read the reviews and buy the book: Amazon UK – And:Amazon US 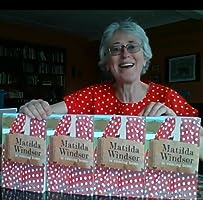