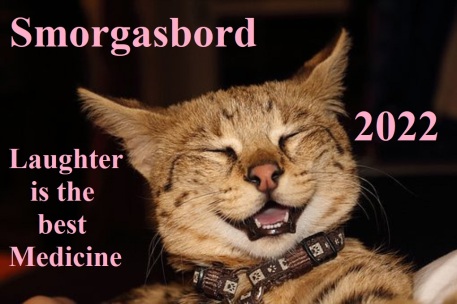 And for dessert some snippets and when all hope appears lost….

People have always named children after expensive things, Mercedes, Dior, Chardonnay next year watch out for Electric, Gas and Petrol.

And a follow up to the recent storms in our area

EDIT… only 4 trampolines, 3 have moved on

When all hope appears lost

An elderly couple were flying to Hawaii for a two-week vacation to celebrate their 50th anniversary.

Suddenly, over the public address system, the captain announced, “Ladies and gentlemen, I am afraid I have some very bad news. Our engines have ceased functioning and we will attempt an emergency landing. Luckily, I see an uncharted island below us and we should be able to land on the beach. However, the odds are that we may never be rescued and will have to live on the island for the rest of our lives.”

Thanks to the skill of the flight crew, the plane lands safely on the island.

An hour later, the husband turns to his wife and asks, “Honey, did we pay the car bill this month?”

“No, sweetheart,” she responds.

Still shaken from the crash landing, he then asks, “Did we pay our credit card bill yet?”

“One last thing, did you remember to pay the medical bill for the hospital visit last month?” he asks.

“Oh, forgive me, sweetheart,” begged the wife. “I didn’t send that one, either.”

The husband grabs her and gives her the biggest hug in 50 years. She pulls away and asks him, “What was the hug for?”

The husband answers, “They’ll find us!”

A review for What Happened in Vienna Jack?

billierosie5.0 out of 5 stars What Happened in Vienna Jack? by Daniel Kemp

Reviewed in the United Kingdom

Truth and lies, lies and truth and which is which? Can the truth be hidden in a lie and a lie be veiled in the truth?Suppose there are secrets too? Just the knowledge that something is hidden, well, reality can become a little blurred and obscure. When Patrick West meets Jack Prior in Daniel Kemp’s “What happened in Vienna Jack?” an investigation into police corruption in Soho leads, indirectly, to what could become a world ending catastrophe.

“What Happened in Vienna Jack?” Is a thriller, a tale of espionage and deceit, a story where a turn of reality can change with the turn of a page. I am constantly amazed by Daniel Kemp’s ability to not only keep control over a vast array of characters but, simultaneously, weave an erudite absorbing narrative that leaves me confounded. It was difficult to harness what I was reading. Daniel Kemp is meticulous in his research and extremely knowledgeable about Europe’s political landscape of 1933-1970.

In November of 1937 a violation, somewhere in Europe and prior to WW2, precipitates the unfolding narrative. Like any violation it is cruel, humiliating…just by reading about it, I felt dirty. The violation involves a prominent Nazi and a member of the British monarchy…see what I mean about secrets? This secret is so controversial (and “controversial” here is a massive understatement) that it is hidden, even to the point of murder, for fear of the secret being divulged. It’s an adroit piece of writing.

When I’ve posted this review I shall be reading “What Happened in Vienna Jack?” again. I think that most lovers of the thriller genre will feel the same. I’m not ready to leave either the characters, or this compulsive, gripping narrative…I’ll linger over every paragraph. And I’m pleased to learn that this book is just part one of a book series. If I haven’t made it clear enough, this book is highly recommended.